Posted on December 4, 2015 by Thomas Waind Leave a comment

I have been stuck on this concept since my brother and I were talking basketball last weekend. He had just recently reread Bill Simmons’ “The Book of Basketball” so he was pretty jacked up to talk hoops. After a half hour of bouncing ideas back and forth, he asked me, “in a pick-up game to 21, you can pick any player in NBA history, your life depends on this game, who’s on your team?” He then started listing off the five best basketball players in NBA history, “Magic, Jordan, Bird…” It can’t be that simple can it? This quickly turned into an argument because I wanted Gary Payton and Dikembe Mutombo on my team and after half an hour of this back and forth, I could not come up with a team.

Well, after a week to cool down from our heated debate, I finally have my team. But before I can say who’s on it, I need to establish the assumptions I’ve made while making my team. I am picking players for a pickup basketball game, where the winner is the first team to 21 points. The teams are five players per side, full-court, no shot clocks, three-pointers count for 2 points and anything scored within the arc is worth 1 point (a flawed system, but it is what it is). For each player I pick I will specify which year/version of that player that I am picking.

Without further ado here is my team:

Coming off of an NBA championship and an MVP winning season, Curry has responded with arguably the greatest 20 game stretch of basketball the NBA’s ever seen. I want a quick, sure-handed point guard, with great vision to run a D’antoni style 7 seconds or less offense. Steph Curry is perfect because he is essentially Steve Nash on steroids. He could single-handedly bury the other team with his jump shot before you could even blink.

And when the other team doubles down on him he has shown to be a very inept passer.

The biggest knock on his game has always been his defense. But since Kerr took over as Golden State’s head coach, Curry has actually developed into one of the best defending point guards in the league. Since three pointers are worth so much more in pickup games (three pointers being worth twice as many points than an inside-the-arc shot, as opposed to a league game’s ratio of 1.67), it is important to have sharpshooters to knock down those shots and space the floor. Picking Curry is a no-brainer.

This is probably the pick that I will need to defend the most. I can already hear people shutting their laptops. Why would I take McGrady as my shooting guard? Why not MJ, Kobe, Vince, or any Hall of Fame guard?

I picked McGrady because I wanted a big, athletic winger who could defend multiple positions, who if all else fails can be an awesome heat-check player. People need to forget old man McGrady who barely saw the floor in San Antonio in 2013, and remember the First Team All Star from 2003. I wanted McGrady because he can be the Alpha Dog when he needs to be the Alpha Dog.

To have an MJ or Kobe on your team would make it a pure isolation game. You can win a lot of games with MJ or Kobe in their primes, because 99% of the time they are unguardable. But, say in the other 1%, neither player has their game going. The ball is then stuck in their hands, and when other players see the ball they do not have any rhythm. In my attempt to build the perfect pickup team, I’m looking for super stars who can dominate the game, but concede touches and still be effective when their shot isn’t falling.

McGrady has had experience playing at a high level while having to share the ball with Vince and Yao. But when he gets going he is one of the most unstoppable players on the planet. If you don’t believe me then you have never seen this clip:

There are not many 30 second stretches of pure domination in sports that can top that. McGrady is an above average shooter, a phenomenal athlete and ridiculously fun to watch.

The length of McGrady’s peak and the lack of an NBA championship ring has made him a border-line Hall of Famer. But at his peak not many players were better than T-Mac. 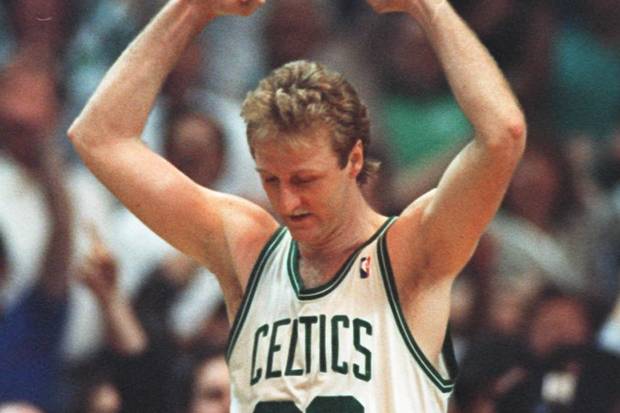 Bird is the versatile glue guy for this team. He can knock down threes, dish the ball, play some solid defense on the wing or the post, grab boards and just flat out compete.

I picked his 1984-85 season because it was his first after switching from power forward to small forward. The switch did wonders for his offense as his 3 point percentage jumped from .247 to .427 and as a result he claimed his second NBA MVP award. The year before he was a Second Team Defensive All Star, League MVP and Finals MVP. He is a winner.

I also love the visual of slow, white, lanky Larry Legend swaggering up to the court and raining threes on unsuspecting opponents.

Bird is the word!

Understandably, Lebron is the key to this team. On defense, he will guard the other team’s best forward/wing. He’s got the size and strength to shut down power forwards and the quickness to keep up with guards. For all of the reasons that people rave about Draymond Green, you can insert Lebron’s name into those compliments. After Lebron, the rest of the defense falls into place. After Lebron picks up the other team’s best player, Bird guards the bigger forward/wing and McGrady guards the faster wing. This kind of flexibility will be excellent for defending pick and rolls.

He can easily be the alpha dog on offense for the team. He is too fast for most forwards to catch and can post up any guard. But if he doesn’t have the hot hand, he has excellent play making abilities. Having Lebron on my team helps me sleep easier after not taking Magic Johnson as my point guard.

I picked his 2012-13 season because it was his first year playing power forward as his primary position (Spoelstra doesn’t get enough credit for the small ball movement). In 2012 he also had his career high in three point shooting hitting 40.6% of his looks. It doesn’t hurt that he was also made the 1st All Defensive Team, 1st All NBA Team, League MVP and Finals MVP.

Lebron might just be the best all around player of all time–if it seems like I’m over-pumping his tires, I’m usually one of his biggest skeptics–so it would be criminal to not have him on this team.

Sure there are better centers: Russell, Shaq, Hakeem, Wilt, Robinson, Duncan and I’m sure there are more. But try and find a better big man to play the fifth fiddle on this team. He’s a bull in the paint, active on the offensive glass and has a nice mid range jumper.

But where he makes his money is on the defensive end where he’s made the First NBA All Defense Team nine times. Being such a mobile big man, he is great at defending the pick and roll and protecting the rim. KG is also very strong when guarding the low-post. Not to mention his relentless box-outs make getting offensive boards next to impossible for the opposition. With The Big Ticket on my team, the paint is secured.

I also love the angle on calling your own fouls in pick-up basketball. This means KG can set all of the illegal screens his heart desires. The Garnett is also a world class trash talker who gives my team an edge.

Last Words
When building this  team, I was definitely influenced by the Warriors and the small-ball trend. I tried to make the most defensively-flexible group of athletic play-makers, with strong shooting ranges.

By no means is this team perfect, and that’s why I love basketball. There are so many players and so many strategies that there are limitless ways you could go to make such a team. You could surround Hakeem with Ray Allen, Curry, Stojakovic and Reggie Miller.  You could build a defensive juggernaut that would wear down the other team. You could just build a hero line up with the five best players in NBA history. There are too many combinations to have a definitive answer.

To my tens of followers, feel free to critique my picks and share your 5 in the comment section.