Posted on January 18, 2018 by Thomas Waind Leave a comment

What a week for basketball feuds. Monday afternoon kicked off with Kyle Lowry and Ben Simmons mixing it up on the court and threatening to meet eachother in the tunnels after being ejected.

Kyle Lowry and Ben Simmons appear to motion to each other to meet in hallway after double ejection 👀 pic.twitter.com/Ga7vi0zrkL

Kyle Lowry tried to pursue Ben Simmons after the pair were ejected from today's game, per a source. I'm told Simmons went straight to the locker room; never made contact with Lowry.

Then later that night was the whole Rockets-Clippers debacle that took the NBA by storm.

Ariza & Austin Rivers talking trash, Blake comes to his defense, gets tossed as does Ariza pic.twitter.com/ssXnmnkW0x

Mike D'Antoni drops a "f*** you on Blake" pic.twitter.com/2QkM6fvGHm

Then as a follow-up, Afflalo threw a wild haymaker (that missed) in the Tuesday night Magic-Timberwolves matchup.

What is going on in the NBA 👀 pic.twitter.com/uKPZ4hnAA9

All of this madness begs the question: Which NBA players actually scare you? Apologies to current instigators like CP3, Draymond and Blake, but the only people scared by those “tough guys” are unsuspecting testicles and the faces of team trainers. What I’m going to try to objectively figure out is: which NBA players from the last couple of decades would scare you most if they came knocking on your locker room door? I almost certainly missed some guys but here’s a list of some of the baddest dudes in the NBA. 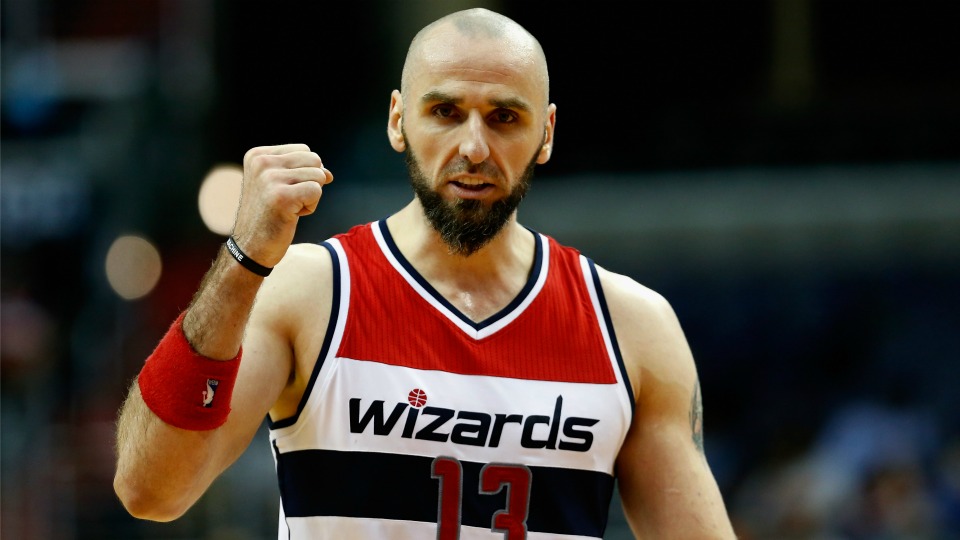 Both of these guys are known for their physical play and imposing stature. But, while both have been known to throw the odd cheap shot on the court (Zaza especially), there is no proof that either player is necessarily an off-court threat. I have them on this list almost purely for aesthetic reasons. Both Zaza and “The Polish Hammer” look like stereotypical Eastern European henchmen for a Bond villain. If you told me that Pachulia was a hitman for the Georgian mob I would absolutely believe you. Only a trained killer (or a complete idiot) would go right at Kevin Garnett with no regard for his own safety:

Johnson is a second-degree black belt and is an experienced MMA fighter and kickboxer. In a mano a mano scrap I don’t think there’s anyone in the NBA that I’d want to fight less than James Johnson. Between his parents and eight siblings, every member of his family has a degree of black belt and, from the sounds of it, the Johnson household was some sort of fight club.

In 2015 Markief and Marcus were involved in two aggravated assault cases, where the twins and three other men (including former Baltimore Ravens safety Gerald Bowman) beat up a 36-year-old man named Eric Hood outside of a rec center in Phoenix. Hood was a former mentor for the twins but had allegedly had been sending mother Morris inappropriate texts, an devastating move that called the Morrises into action. Speculation is that the legal proceedings surrounding this incident is what led Phoenix to trade Marcus to Detroit and Markief to Washington. Kief and Marcus are already known to mix it up on-court in the NBA and, if provoked, they are a lethal tag-team duo.

At 6’1″, Beverley might be considered short for an NBA player. But I don’t think there’s a single person in the NBA that he wouldn’t fight. The Rockets should consider themselves lucky that Beverley was inactive on Monday night because if he’s in that game there’s no way Chris Paul gets out of that game without a broken jaw.

This part of the list is where we cross the threshold of “competitive guys who take it too far” and get into the psychopaths. Matt Barnes is actually crazy. He will stalk you both on and off the court (ask Derek Fisher). This guy thrived on chaos and animosity and if the other team won’t bring it, he sure as shit did.

This guy needed the whole MSG security team to bring him down. He’s currently banned from The Garden because Knicks owner James Dolan is rightfully scared to death of the guy. Oakley has a type old-school toughness that was sadly left in the 90’s. The slap fights and “hold me back fights” that we see today would not interest Oakley. This guy always went for the jugular.

Almost everyone knows the artist formerly known as “Ron Artest” as one of the ringleaders of the “Malice in the Palace” debacle of the early 2000’s. It takes a special type of trigger-happy lunatic to actually jump into the crowd and fight fans. Whether his jersey says “Artest” or “World-Peace” on the back everyone knows the brand. This guy is one bad mama jama. This clip of him scaring the bajeezus out of “Psycho T” Tyler Hansborough is an all-time classic.

Rodman is a lunatic. Nobody will question this. He’s been known to chuck knucks on the court, he’s constantly in trouble with the law off of the court, was a part-time pro wrestler during his basketball career and he was a huge Trump supporter during the Donald’s campaign. Now this guy is even scarier since becoming golfing buddies with North Korean dictator Kim Jong-Un. Any confrontation with Rodman had the potential to go full-blown nuclear.

Anyone willing to pull a gun on a teammate over money-owed from an airplane card game is someone to keep an eye out for. While most basketball people know of the Arenas-Crittenton exchange, here’s the crazy account given by Caron Butler from an article on USA Today Sports:

“Hey, MF, come pick one,” Gilbert told Javaris while pointing to the weapons. “I’m going to shoot your [expletive] with one of these.”

“Oh no, you don’t need to shoot me with one of those,” said Javaris, turning around slowly like a gunslinger in the Old West. “I’ve got one right here.”

He pulled out his own gun, already loaded, cocked it, and pointed it at Gilbert.

Other players who had been casually arriving, laughing and joking with each other, came to a sudden halt, their eyes bugging out. It took them only a few seconds to realize this was for real, a shootaround of a whole different nature. They all looked at each other and then they ran, the last man out locking the door behind him.

Any guy that goes toe-to-toe with a convicted murderer (Crittenton is currently serving 23 year prison sentence) isn’t a guy I wouldn’t want mess with.

“The Franchise” was a five tool player: imposing, trash talk savant, crazy competitive, violent and he had no fear. Here’s an exchange between Garnett and Joakim Noah from a couple of years ago transcribed by SBNation:

“One time, he asked [Joakim] Noah if he could rub through his hair, like a female or something. … And I know that kind of made [Noah] hot. And this was when Noah was a rookie, too. I remember Noah looked up to KG. He was like, ‘Man, KG, I had your poster on my wall, I looked up to you, man.’ And then [Garnett] just said something like that, and was like ‘F— you, Noah.’ I was like, ‘Whoa.’ This kid fresh out of college, looks up to KG, just said he had his poster on the wall, and he tells him that! It crushed him. It crushed Noah.”

KG yelled at teammate Glen “Big Baby” Davis so hard that he cried.  KG used to smash his face against the padded basketball stanchion during warmups just to fire himself up. KG incited Carmelo Anthony by telling him that his wife “tastes like honey nut Cheerios” which Melo didn’t take well to say the least.

The Big Ticket could talk the talk better than anyone. And nobody could question that he definitely walks the walk. Garnett is the last guy that I’d want to tango with.