The Cleveland Browns are starting to cook

Since Hue Jackson became Cleveland’s head coach in 2016, the Browns have compiled a nauseating record of 1-31. Last year they became the second team in NFL history to go 0-16 (the other was the Detroit Lions in 2008). It has been a while since the Browns organization has even threatened to be relevant, but I think it’s safe to say that last year was finally rock bottom (knock on wood).

Since the end of the 2017 season they have brought in a new GM in John Dorsey who has already begun to put his stamp on the roster.

These moves are surely an aggressive change of pace for a franchise that has done nothing but hoard and collect draft picks for the last couple of years. I personally like the moves because it did nothing but add controllable, established talent to a roster sorely in need of it. While some may feel uncomfortable with the sheer volume of picks going the other way, Cleveland still has nine draft picks under team control and a whopping five picks in the first two rounds including the 1st and 4th overall picks.

I think the most exciting prospect in Cleveland is the potential  options they have at QB. The team has suited up a miserable collection of QB’s since the franchise returned to the NFL in 1999. At this point everyone has seen the infamous quarterback jersey: 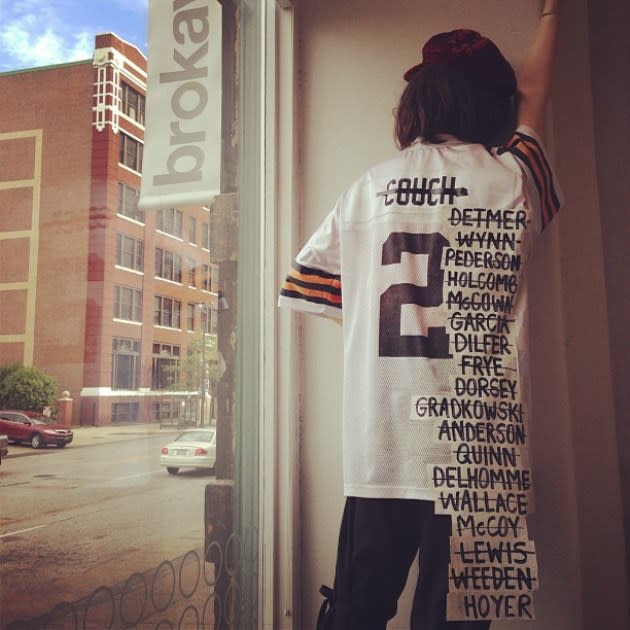 Things have only gotten worse at the position since Brian Hoyer’s addition to the jersey. Since 2014 the Browns have seen Hoyer, Johnny Manziel, Connor Shaw, Austin Davis, Cody Kessler, Josh McCown, Robert Griffin III, DeShone Kizer and Kevin Hogan all start at football’s most important position. That is an all-time level of futility that may never be surpassed.

But as I just mentioned, there is some legitimate hope that things may start to take a turn for the better at the position. In the present, the addition of Tyrod Taylor is an unspectacular but necessary measure to stabilize the position. At the reasonable price of a third round pick (just a drop in the bucket for a Browns team with a tonne of draft assets), Cleveland got a quarterback who at the very least be the perfect bridge to the quarterback of the future and at most could make the team semi-competitive. Tyrod won’t wow you with his arm, but he is one of the most mobile quarterbacks in the league and is great at limiting turnovers (a huge plus for a Browns team that had an NFL-worst 41 turnovers last year).

And while Tyrod spends 2018 scrambling around the pocket and chucking short passes, on the sidelines should hopefully be Cleveland’s future quarterback waiting in the wings and developing. With the first and fourth overall picks in this year’s draft the Browns will have their pick of the lot among top prospects like Sam Darnold, Josh Allen, Baker Mayfield, or Lamar Jackson. It’s been a while since the top of the draft has had this many options at QB so, barring yet another Brownsian whiff, it should bode well for Cleveland.

Please take Barkley at #1, QB at #4. Sign Bradford as a stopgap option to let rookie QB develop and rely on the stout defense that was ranked 14th OVR last year. Barkley/Gordon/Landry/Coleman/Njoku is a solid offensive core in a division that looks suspect aside from Pittsburgh. https://t.co/bgloZGTTSz

While the Browns gave up the second-most points in the league last season, they were a respectable 16th in defensive DVOA with a young defense that will surely get better. Last year’s first overall pick Myles Garret looks like he could be an absolute stud of a defensive end.  It’s on the offensive side of the ball that I think there will definitely need to see some focus in cultivating talent. Adding Jarvis Landry to receiving threats like Corey Coleman, Josh Gordon and David Njoku definitely give Tyrod some intriguing options. I’m a huge advocate for Cleveland taking Saquon Barkley with the first overall pick in the draft. After tearing up college football and putting on a show at the combine with his elite speed, quickness and strength, Barkley could run amok on NFL defenses next year. Unless Cleveland thinks that “their guy” at QB would be taken by the Giants or Colts before they pick again at number 4, I think you’ve got to take Barkley.

There is something to be said about building a roster through trading for established talent instead of relying on the relative luck involved drafting unproven college players or the financial strain of delving into the bloated free agent market. With their bounty of draft assets and cap space the size of the GDP of a smaller nation at their disposal, the Browns can get creative with the rest of their offseason. It’s kind of crazy that you almost don’t have to squint to see a promising football team actually rounding into shape.

On our latest podcast we had a bit of Browns talk starting at the 2:50 mark: