Posted on October 4, 2018 by Thomas Waind Leave a comment

I’m starting this weekly jersey blog because I’ve always been a huge jersey nut but have yet to really do much blogging on the subject. The idea for these blogs will be to write about any cool or funny jersey talk circulating around the internet and to roast some real jersey fouls that pop upon my Twitter feed. As someone with a checkered past with jersey purchases, I do have some insight on these matters. As I go along I hope to have some people send in some cool jerseys for me to blog, but more importantly feed me the bad ones. Since this is a new feature on the website it’ll obviously take some time to gain any steam at all so in the meantime I’ll do a quick run through on my some beauties that I’ve acquired. But in the future, if you want to put your buddy on blast for an old Aki Berg jersey but are too polite, send them my way.

Now to give a taste of the highs and lows of my jersey collection:

The 2014 Sochi Olympic Martin St. Louis jersey is easily the best jersey that I own. These jerseys were kind of divisive compared to most of the other jerseys that Canada has rolled out. This was the first year of the modern Nike necklines and the jersey definitely fits like a lighter athletic material than the typical hockey jersey. I personally thinks it’s awesome because of the seeming throwback design to it and cool little details like the 12 golden maple leafs on the front representing (at the time) Canada’s 12 combined gold medals in men’s, women’s and sledge hockey.

On a personal level this jersey is awesome because, when I was growing up, Matrin St. Louis was one of mine and my grandpa’s favourite players. If you were a fast, skilled player and/or a good old Canadian boy my grandpa seemed to be a huge fan. Martan St. Louis (old grandpa Waind pronounced Martin like some sort of Quebecois but then butchered the  last name and pronounced it like the city of St. Louis) seemed to be at the intersection of a Venn diagram that had the Sedin twins on the one side and the Sudbury born Staal brothers on the other.

Anyways, the summer before the 2014 Olympics my grandpa passed away and when Marty finally cracked team Canada I knew I had to scoop up this jersey. It was just an awesome scene waking up early to watch my guy win the gold and get thrown on his shoulders by back-up goalie Mike Smith. Simply the best. 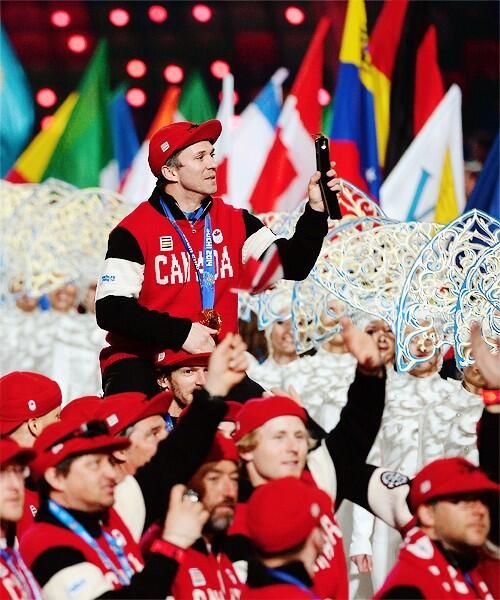 Well that’s not bad at all…

The kicker here is I got brainwashed by the Cliff Fletcher propaganda when he and the Toronto media labeled Luke Schenn the future captain of the Toronto Maple Leafs. You would have thought that I would’ve seen the writing on the walls after the poor play and Dion Phaneuf trade. But I still thought that the hulking Saskatchewan native would eventually turn it on and become the Adam Foote calibre shutdown guy we were promised. The Schenn-for-JVR trade that happened right after I got this jersey sucked because, as a hockey move, I knew it was a home run from the moment it was announced. As a consumer of mediocre hockey jerseys it made me nauseous.

I actually rocked this jersey last night at the sports bar for the Leafs opening night dub over the Habs (not a biiiiig deeeeeal). As a jersey, the 2010’s Maple Leafs Reebok third is one of my favourites. And since it has Luke Schenn on the back I don’t mind wearing it out and risking some beer spillage. It also separates me from some of the fair weather fans rocking the Tavares jerseys who would have no idea who Mikael Tellqvist or JS Aubin are.

Why would I buy this?

Like the Blue Jays front office, I was tricked by the sweet swing and luscious mullet. He had the speed, power and tools of  a hall of famer but just didn’t know what to do with them. In 2007 Baseball Prospectus had him ranked as the 8th best prospect in baseball wedged between Cy Young pitcher Rick Procello at #7 and Buster Posey–easily the best catcher of this decade–at #9.

I just remember at the time I got this jersey, the Jays were in flux. Bautista and Encarnacion were just starting to breakout, the bullpen was headlined by Casey Janssen and the fans were being sold on the youth of Rasmus, Brett Lawrie, JP Arencibia and Travis Snider. For me it was a coin flip decision between Rasmus or a Ricky Romero.

I sometimes wear this jersey to the bar because–like the Luke Schenn–I don’t care if I spill a drink on it. I still get the odd guy yelling “Who the fuck buys a Colby Rasmus jersey?” at me. Who the fuck indeed.

Jerseys around the internet

I don’t have a tonne to take on this week. I plan to get out a blog within the week power ranking the new NHL third jerseys. Speaking of the third jerseys how those Coyotes throwbacks?

Thanks to the @ArizonaCoyotes for the new threads. Looking forward to home opener Saturday night against the @AnaheimDucks when the Coyotes will rock the hottest new 3rd jersey in the league. #Kachina pic.twitter.com/MAqvjQB7CZ

If you look closely the Coyotes actually cheaped-out on giving Biz Nasty an authentic Adidas sweater and hooked him up with a replica jersey. He’s a team employee on the media side and one of the most beloved the players in franchise history but they couldn’t shell out that extra $100 bill? I was going to make a joke about the NHL having the team on a strict budget…but apparently they actually have an owner now? Andrew Barroway? I couldn’t care less about this team.

If you want to show off a sweet jersey (like one time in class I saw a guy with a Florida Gulf Coast Chris Sale jersey), or want to put a buddy with a jersey-buying problem on blast, be sure to send your submissions to me over Twitter @twaind4