Posted on November 1, 2018 by Thomas Waind Leave a comment

This week’s round-up marks the official end of baseball with a call for MLB jerseys. I’m going to cool my jets on the whole critiquing of entire collections. It takes a lot out of you to be as critical as I am. Also late in the blog I do a very quick power ranking of the NBA city jerseys that have been released. Buckle in.

Throwback to Halloween '04 with Roy Halladay and Vernon Wells pic.twitter.com/nityGGzKvl

With last night being Halloween, this is a double whammy jersey post. Growing up Roy Halladay was by far my favourite athlete (again gone too soon) and I wanted nothing more than too grow up to be him. Now unfortunately I was very small with an awful arm so those dreams would’ve been better spent on a profession that I could achieve like an accountant or horse jockey. Either way, in backyard wiffle ball (against my brother who is 4 years younger than me) I may as well have been Roy Halladay. We’re talking slicing cutters, wipeout sliders and some sweet chin music to keep Phillip honest.

Now I couldn’t find my Halladay jersey but my brother’s Wells is still lying around. While the Jays current look is the best uniform set that they’ve ever had, I kind of miss these grey and silver bad boys. The “angry bird” logo on the front evokes flashbacks of Orlando Hudson smiles and Miguel Batista blown saves. If I could get my hands on a “new” Halladay jersey in one of their old jerseys nothing would make me happier. Because, contrary to what the losers and haters may say, I can’t squeeze into a Youth Large.

Another fake jersey for @twaind4 to rip apart but after the #WorldSeries I feel like this one needs to be seen pic.twitter.com/6YBrhMCXj8

It sounds like Cam is still a little shaken up over my breakdown of his collection but quite frankly he should just move on and get back in the gym to refine his jersey game.

While I’m pretty indifferent about the Red Sox, Big Papi and his big dingers warrant some jersey appreciation. As a retired Red Sock(x?) Big Papi certainly isn’t afraid to show his bias as a member of the media:

Who cares? Papi is the man. 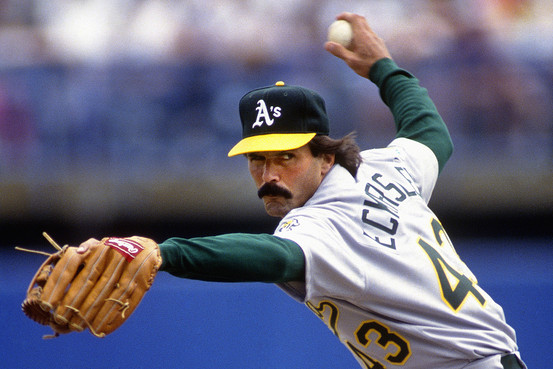 Sweet stache, the 1992 AL Cy Young AND MVP, a 1987 World Series ring, a lifetime 3.50 ERA, 361 games started and 390 career saves. Eckersley was an absolute cowboy. After over a decade as one of the best starters in the game for the Indians, Red Sox and Cubs, Eckersley reinvented himself as one of the best closers of all-time when he was traded to the Oakland A’s in 1987.

As for the jersey itself, I’ve always thought that the A’s jereseys have a clean look. The green and yellow colour scheme is very utilized with only the Green Bay Packers coming to mind as another obvious team that rocks the look.

Another Oakland A’s great hitting the blog. There is nobody better at stealing bases. Ricky Henderson is to base stealing as Joey Chestnut is to hot dog eating. He’s the best and it isn’t even close. Henderson holds the major league records for career stolen bases, runs, unintentional walks and leadoff home runs.

Rickey is also regarded as one of the biggest characters in baseball history. Supposedly he used to practice his swing naked in front of the mirror before every game while yelling “Rickey’s the best!”.

Well, Rickey is the best.

This is a very cool jersey. I’ve actually seen this jersey pop up once or twice in a Brock Sport Management class or at a bar in downtown St. Catharines. As someone who sides with Jordan in the heated MJ v Lebron debates and as a huge fan of Space Jam this jersey speaks to me. I for one want to believe the conspiracy theory that MJ turned to a career in baseball because David Stern secretly suspended behind closed doors for excessive gambling debts.

#TBT As a kid, @athielen19 dressed up as his favorite #Vikings player for Halloween, @RandyMoss. #Skol pic.twitter.com/wN0JZQIMpI

Penguins wearing “Stronger Than Hate” patches tonight. Jerseys will be signed by each player and auctioned to benefit the families of victims of the Tree of Life synagogue tragedy. pic.twitter.com/ZDnJtrK0vN

The jersey LeBron signed for Luka 🤝

.@luka7doncic had the biggest smile after getting a signed LeBron jersey. (via @gefkarpides) pic.twitter.com/nUIbFWV63u

An Impromptu Power Ranking of the new NBA “City” Jerseys

Yes, those are Prince jerseys. How the Wolves and Nike crafted them, with help from Prince's estate, as told to https://t.co/zbzq88KImD: https://t.co/l6md31tpHk

Our new black City Edition jerseys are based on inspiration from automotive culture and the hard-nosed mentality of Detroit.

🚨 City Edition jerseys leak alert 🚨
What do you think about these #Bucks jerseys? (via @IKE_Bucks) pic.twitter.com/queJ5UoM43