Posted on December 27, 2018 by Thomas Waind Leave a comment

Here's a repost of the missed Duke jerseyshttps://t.co/fQ3Sriywga

Barrett’s ceiling is that of an elite playmaking small forward in the NBA and Williamson is a 285 pound wrecking ball that demolishes every rim in sight. Zion and RJ are projected to go 1-2 in the 2019 NBA draft and could be right up there with Hill-Laettner era Duke, Anthony Davis-MKG Kentucky team and the Michigan Fab Five for best combos in college basketball history.

The throwback Brewers look is the only way to go and pinstripes always play. This jersey is an overall win.

The 90’s were jam-packed with stars and the Mail Man can often times get lost in the shuffle. He’s a two-time MVP, he’s made the All-NBA First team 11 times and is second all-time in NBA scoring with 36,928 points (25 PPG). But in a decade with all-time greats like Jordan, Hakeem, Robinson, Barkley, Pippen, Drexler, Ewing, Miller, Stockton and Shaq it can be tough to stand out. Nothing screams 90s like a purple Malone or Stockton jersey, even if they couldn’t get over the hump and beat MJ for a championship.

As I’ve mentioned in the past, the red Patriots jerseys are so much cooler than the grey on navy look that they insist on. And yeah I guess Brady is the GOAT… 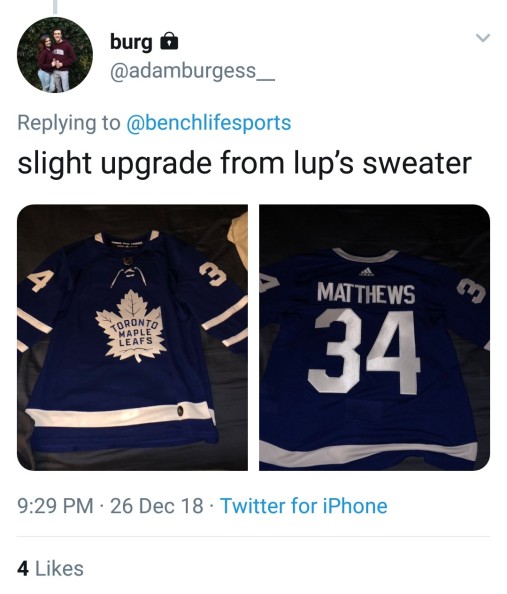 This is the second Matthews jersey posted this year and I want them to keep on coming! He has 19 goals in 23 games… This guy is unreal.

Last night was Auston Matthews' 27th game with a goal and assist, tied for 22nd most thru age-21 since 1987 https://t.co/8desWPXRM3 pic.twitter.com/cqdh0dIfHF

Remember when the 2016 Draft was framed as “will the Leafs choose the elite center or the elite goal-scorer?” Well Matthews ended up being both. At 21 years-old Matthews is already one of the best goal scorers in the NHL. For once it’s a good time to be a Leafs fan.

The end of D-Will’s NBA career took a bit of a hit with the mediocre last few seasons of his career. In his prime he was a top five point guard in the league. He was a notch below Chris Paul and Steve Nash.

I’d rock a Williams jersey, although a Utah Jazz or a New Jersey Nets jersey would bring a bit more punch than a Brooklyn one.

After years of club hockey in the ACHA, the Arizona State Sun Devils have been a Division 1 NCAA program since 2015. While they are Independent and don’t belong to a conference, the 12-6 Sun Devils are the 15th ranked team in college hockey with what is already their highest win total since joining the NCAA. Undrafted 22 year-old forward Johnny Walker leads the nation in goals with 17 in 19 games. Walker and teammateTyler Busch were on the Spittin Chiclets podcast last month and talked all things Sun Devils hockey. It’s a good listen so check it out if you haven’t already:

who else has their #84 @browns jersey ready for Sunday? pic.twitter.com/09WIfhCKPM

Week 17 is coming in hot and everyone is scoreboard watching. I for one don’t want to see the Steelers and that moron Ben Roethlisberger make it. I just want a playoff spot come down to a hail Mary or some sort of play that includes 8 laterals. Bring on the madness.

These TMNT jerseys though 👌 pic.twitter.com/TnxQqVAFUd

As Timberwolves wear their “Earned Edition” Prince-tribute jerseys for the first time tonight, @KarlTowns goes with the Prince custom Nikes (📷 by @nbakicks) pic.twitter.com/SvR8i1JHhx

I kind of want a Kalil Mack Bulls jersey now.

Luka found the young fan he crashed into, and gave him his signed jersey after the game 🙌 pic.twitter.com/WKOcfnI9qI

Young Sheldon over here oversold this collision. As someone who couldn’t be further from courtside lifestyle, sorry if I don’t feel sorry for this little punk.

Little man thought his Cam Newton jersey came from Cam himself and was ecstatic…Cam saw and decided to make that dream a reality pic.twitter.com/v0nIXG4frR