Posted on January 17, 2019 by Thomas Waind Leave a comment

Since the lockout, Crosby has undoubtedly been the best player in the NHL. Ovechkin the best goal-scorer, Joe Thornton the best set-up man and Cal Clutterbuck the most-hitting player. But in my mind, Datsyuk was easily the most fun to watch. Lock the door, put a sock on the door knob and and feast your eyes on this puck wizardry:

This guy was pure electricity. Not to mention he also won faceoffs! And actually back checked! And won 2 Stanley Cups! His 2007-08 season where he won a Selke for league’s best 2-way forward, scored 31 goals and 97 AND won a Stanley Cup has to be one of the most impressive seasons in the modern era. What a stud.

Let’s take a look in at how Matthews has been doing lately.

Hard to believe…but Milan Lucic (3) has scored more goals in the month of January than Auston Matthews (1) and Patrik Laine (1) combined!😉

Not a hot start to 2019 but there’s a reason the season is 82 games long and not 2 weeks. Anyone panicking about the Leafs current slide are the same ones who kept projecting Matthews’ scoring totals back when he was on pace for like 100. But that’s the Toronto sports scene for ya. The sky is always falling.

.@AM34 really put his whole heart into it. pic.twitter.com/PgcDqxvpv8

I’m a big fan of the Flyers’ oranges. They look a lot better than their mid-2000’s black primary jerseys from the Robert Esche era.

As for Konecny, he’s a cool pleyer to root for. The former Chatham-Kent Cyclone and Ottawa 67 has been a real player for the Philadelphia Flyers. The speedster was taken 24th overall in 2015 but is ninth in scoring from his draft class (ahead of him are McDavid, Eichel, Rantanen, Marner, Aho, Barzal, Werenski and Hanifin (holy shit this was an awesome draft year)). While he’s have a slow year compared to his 24 goal 2017-18, Konecny has a lot in the tank.

The greatest power forward of all time #NHLBruins 🐻 pic.twitter.com/gdh7w3u4e4

Greatest power forward of all-time is a bit of a stretch. Then again guys who average a point-per-game and around 100 PIMs a season don’t grow on trees. Fighting is a bit of a lost art form these days and anytime a guy can effectively chuck knucks and score goals I do take notice.

Some people think that I hate the Bruins and that… well that is true. But that’s only been a recent thing. Pre lock-out 2005 the Bruins and Leafs never seemed to be good at the same time so I could appreciate the Joe Thorntons, Sergei Samsonovs, Cam Neelys and  and Ray Bourques or what have you. But that ship has unfortunately sailed. Kick rocks Burgess. I have no time for your irrational Matthews-hating ways.

Heavens to Bettsy I’m blushing. What a jersey. This era of Suns jersey was before the long hair and MVP trophies. 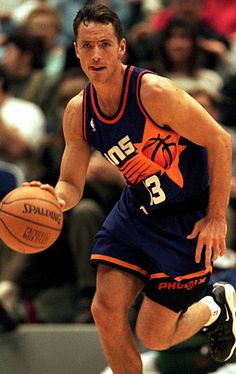 But any Canadian and/or basketball with a beating heart can appreciate MVSteve. He’s the only Canadian to win NBA MVP and is the 11th player to ever win back-to-back MVP’s.

Here’s a fair warning, I’m about to hit you with a Datsyuk montage and a Nash highlight reel in the same blog. Buckle up.

Here's an old Jagr jersey I got as a kid pic.twitter.com/BjMkAbKbUO

The man, the myth, the mullet. The jersey speaks for itself.

Jagr has officially suited up for the Czech Republic for 133 games internationally in his career. That’s more than his time in Philly, Boston, Dallas and Calgary.

1921 points in 1733 career NHL games. He left the NHL last year at age 45 to play in the Czech Republic. The guy was an absolute legend. I doubt we’ll see him in the NHL again but don’t be shocked if it happens.

See all four of their divisional designs here: https://t.co/GFHkmhRkpd pic.twitter.com/SA5daUxocp

We recommend picking one up during intermission. pic.twitter.com/e1YGhQCJRM

A photo has surfaced of what seems to be the 2019 NBA All-Star jerseys. pic.twitter.com/AOEpH96JAm

The G-League Erie BayHawks will wear MLK-themed uniforms during their game Saturday honoring Dr. Martin Luther King Jr.’s famous “I Have a Dream” speech. King’s likeness is on the jerseys and the word “Dream” is printed throughout. pic.twitter.com/F0inr8sSZv

shoutout to the Evansville Purple Aces for just wearing the early 2000's Raptors jerseys with different letters on them pic.twitter.com/33Bknox8sn