The Golden Knights Expansion Draft was Better Than You Might Think

Posted on June 25, 2017 by Cameron Burgess Leave a comment

Team #31 finally has a roster, but how good is it?

The 2017 Vegas Golden Knights Roster. Calling it, they're making the Playoffs pic.twitter.com/Siv3D4HKHg

Playoffs in their first season? It seems unlikely, but the NHL’s newest franchise should be more competitive than some might think.

While Vegas passed on some big name players, in doing so they built for the future. By making deals with teams to take on bad contracts or by not selecting a certain player left exposed, Vegas was able to collect 10 draft picks, many of which are first or second round in upcoming drafts. Not to mention they already owned the 6th overall pick in the Entry Draft, and had 3 of the first 15 selections. Vegas is already building for the future, which is needed to be able to compete long-term. A lot of people were wondering why Vegas wouldn’t select players like Bobby Ryan and build a better team right away, but George McPhee is clearly considering the future when building this team. He’s proven that he can build a successful team, as he built the Capitals into a consistent regular-season powerhouse.

They also have a ton of defensemen that they can now move to collect more pieces to build for the future. Since the Expansion Draft, they’ve already traded away Trevor van Riemsdyk and have gotten more draft picks in return (2017 2nd Round, 2019 5th Round). It sounds like Colin Miller might be the next to go, with the Leafs rumoured to be interested in the former Bruins D-Man. The Dallas Stars have also been interested in Marc Methot, and Vegas might be looking to acquire another forward that can help the team sooner rather than later. With 15 defensemen on the roster after the Expansion Draft, the Golden Knights certainly had some extra pieces to use as trade bait. 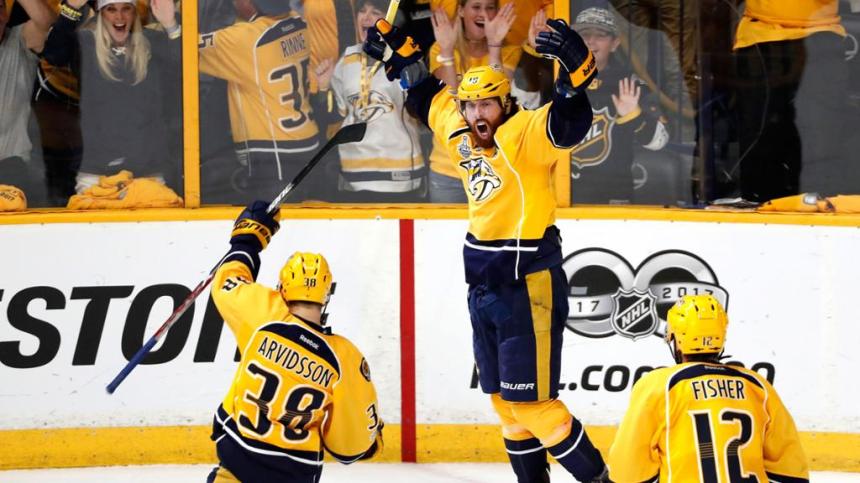 Their biggest weakness at this point are the forwards. James Neal and David Perron are the two big names up front, but the talent drops off after that. In order for Vegas to be viewed as a legitimate playoff contender, they need to make some big changes up front. Personally, I think passing on Bobby Ryan was a mistake. Even though he had a less than stellar regular season, his performance in the playoffs showed everyone that he’s still one of the more talented guys in the NHL. When Free Agency opens on July 1st, Vegas should make a run at a proven scorer such as Alex Radulov since they’ll have some cap space to work with. Even Patrick Sharp could provide another option for the team up front on a one year deal, but Vegas might view the 35 year old as too old since the goal is to build a young team right now. One thing is clear, if Vegas wants to compete this season, they need to add some more options who can score some goals.

One day in Vegas and we've already seen some new friendships🌸 pic.twitter.com/dybfsjpOkQ

The biggest strength for the Golden Knights? Between the pipes, where Marc-Andre Fleury will finally be back where he belongs, as a starting goalie in this league. While his stats may have been slightly below his career average last year, Fleury has put up consistent numbers since being drafted 1st overall by Pittsburgh. When looking at his stats, there’s no sign of him slowing down. With Calvin Pickard as the backup, the Golden Knights have a strong goalie duo, as Pickard has shown he’s capable of playing at a high level. Even though the Avalanche were brutal last year, he was selected to play for Team Canada at the World Championships and backstopped the team to a silver medal after a shootout loss to Sweden (which is still the worst way to lose a championship game).

While there is still a lot of room for improvement, everything that Vegas has done so far has been a step towards the future. With lots of draft picks, young players and some veteran leadership, Vegas is set to become a competitive team a lot sooner than we expect.