Posted on September 8, 2017 by Thomas Waind Leave a comment

Part 1 of 31 in our NHL previews where Ballantyne, Burgess and I rank each NHL team 1 through 31 and give you an outlook on their season. We’re delivering each team’s preview in the order that we collectively power ranked them. This isn’t an exact science but, just like ex-Leafs GM Dave Nonis, for better or for worse you’ve gotta go with your gut.

You can’t sugar-coat it, last season was an unmitigated disaster in Colorado. Their 2016-17 season was the worst that any team has had in the post-2005 lockout era. The Avs got career worst performances from their core of MacKinnon, Duchene, Landeskog, Barrie and Johnson. An injured Varlamov was limited to 24 games and posted an abysmal 0.898 save percentage when he did play. Their lineup was just terribly ineffective from top-to-bottom with next to no offensive support from secondary players like Soderberg, Iginla, Grigorenko, Bourque, Comeau and Colborne. The season spiraled out of control both on and off of the ice with the team playing its worst hockey since leaving Quebec, with behind the scenes turmoil that led to the alienation of Matt Duchene. The Avs will have a tough time topping the lows of last season…

…And yet this season there’s a chance they may even be worse. If Varlamov can’t stay healthy (or you know… can’t stop pucks) then Jonathan Bernier is likely a downgrade from Calvin Pickard in net. Bernier’s numbers actually weren’t that bad with Anaheim last season, a .923 even strength save percentage is actually very good, but as a Leafs fan I’ve been burned too many times by Bernier. He played behind a very strong blueline in Anaheim and I’ve seen him fold under better bluelines than Colorado’s. He is talented enough that he could be a very good backup, but a healthy season from Varlamov would go a long way.

Not to mention whoever the goalie is has to play behind the league’s worst defensive core who got even worse after not replacing Beauchemin or Wiercoch’s minutes in free agency. Colorado’s additions of Colin Wilson and Nail Yakupov were a couple of buy-low moves that could add some secondary scoring to give their big guns some breathing room… but at this point in their careers they’re more likely to be in a heated battle with Carl Soderberg and Joe Colborne for most underwhelming players to don the burgundy “A”.

The weirdest part of this offseason has been the whole Matt Duchene saga. It seems as though both Matt Duchene’s camp and the Avs front office seem content to part ways. But Joe Sakic has had trouble pulling the trigger. Generally you don’t want to trade a player of Duchene’s pedigree coming off of an underwhelming 41 point campaign in a buyer’s market. Either there’s no “fair” trade on the board–Duchene is young still young enough that I thought they could make a Seth Jones for Ryan Johansen-type swap–or Trader Joe’s price is just way too high. The relationship has gotten toxic, to the point that Duchene’s agent Pat Brisson was asked if Duchene would report to Colorado’s training camp if Sakic can’t find a trading partner. Brisson replied, “I don’t have much to say at this point”. If Duchene does get moved before the season, the Avalanche will only get even worse in the immediate future seeing as the trade return will more than likely center around picks and prospects.

Via Own The Puck HERO Charts: http://ownthepuck.blogspot.ca/

MacKinnon has show glimpses of the premier center he could be. But at a certain point he needs to make the jump with both feet. Watching him play in last year’s World Cup with Team North America, MacKinnon visibly stood out on a team of some of hockey’s most talented youngsters and didn’t look lost among the McDavid’s and Eichel’s. He’s shown that he has another gear, the question is can he reach it more consistently? I’m not quite ready to give up on him as the type of player who could be the best talent on a Cup winning-team.

By virtue of having consistently drafting in the top 10 in six of their last ten drafts, the Avalanche have had first crack at top young talent more often than most. If the team is planning on a rebuild, Nathan MacKinnon(22), Gabriel Landeskog (24), Matt Duchene (26) and Tyson Barrie (26) are all young and talented enough that they could potentially fit a shorter rebuild timeline or could each return a significant trade haul in a complete roster blow-up. Rantanen and Jost look like they could be legitimate top 6 forwards in the future and Varlamov has shown flashes as a Vezina-level goalie. The hardest thing to do in hockey is acquire high-end talent, and for as bad as the Avalanche are, they have it in spades.

Since their surprising division-winning 2013-14 season, Colorado’s main issue has been surrounding their big guns with viable talent. Their failed RFA negotiations with Ryan O’Reilly ended in a trade that included shipping out useful winger Jamie McGinn and netted a disappointing return in Mikhail Grigorenko (who just left for the KHL) and Nikita Zadorov. Last year veterans Jerome Iginla and Beauchemin were simply just too old and finally started to slow down.

What doesn’t help matters is that Colorado’s management hasn’t done a great job of hitting on draft picks after the first round and lately their free agent signings have mostly been flops. Their thin roster leaves little room and too much attention for their big playmaking forwards to freely move around the ice and Tyson Barrie and Erik Johnson aren’t defensively responsible enough to viably carry an entire blueline. You can’t expect to be too successful with only one and a half useful lines.

It seems as though the bulk of the terrible 2016-17 roster has remained in tact, which should mean that the kids have ample opportunity to stick with the big club out of camp. North Dakota University standout and 2016 first overall pick Tyson Jost could be an impact NHL center as soon as next season and should give Avs fans plenty of hope. Blue liners Chris Bigras (32nd overall in 2013) and KHL alumni Andrei Mironov (101st in 2015) as well as 22 year-old center JT Compher are expected to break camp as depth players.

The Avs also signed college free agent Alex Kerfoot just as the offseason was closing. The undersized center was originally drafted by New Jersey in the fifth round of the 2012 NHL draft but was granted free agency this summer after a 4 season stint at Harvard. Kerfoot is coming off of a breakout season in which he racked up 45 points in 36 games as Harvards captain which earned him consideration as a top 10 finalist for the Hobey Baker. While it’s tough to tell whether his game matches up against bigger and faster opponents, Kerfoot has an inside track on cracking the Avs out of camp.

While the Erik Karlsson comparisons are tantalizing, 4th overall pick Cale Makar won’t break camp with the team. One would think that the 18 year-old defenseman isn’t going to be rushed into this mess of a hockey team, especially considering he is committed to UMass for the upcoming NCAA season, and will be given plenty of time to develop. He has the type of upside that could make him the undisputed anchor of Colorado’s future blueline. 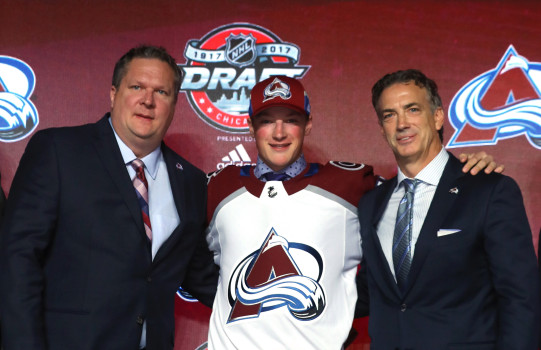 If the Avs are to blow up the current version of this team, Rantanen will no doubt play a large role in the next competitive Colorado team. The Avalanche’s 10th overall pick in 2015, the 20 year old Finnish right winger has already outgrown the AHL in this lone 60 point 2015-16 season in San Antonio. As a rookie he led Colorado with 20 goals last season and was a fixture on their top line by season’s end. At 6’4″ and 211 pounds he’s got the size paired with speed and a hard shot that he could blossom into one of the game’s elite goal scorers.

Did you know? Colorado has three first overall picks on their roster. Nathan MacKinnon (2013), Nail Yakupov (2012), and Erik Johnson (2006). Tanking isn’t all that it’s cracked up to be folks!

Quite honestly, the analytics community has been waiting for this Colorado squad to bottom out since their improbable 2013-14 season that saw them rack up 112 points despite very suspect possession numbers. That season felt very 2012-13 Leafsy in the sense that both teams never had the puck and were regularly outshot on a nightly basis. But they both had skill players who scored enough to get by, all the while being propped up by outstanding goaltending (Reimer 2012-13 Sv%: 0.924, Varlamov 2013-14 Sv%: 0.927 and Vezina runner-up).

Just like the Leafs descension since 2013, Colorado has slowly declined since their Patty Roy-led 2013-14 season until finally hitting rock-bottom last year. The Leafs had to clear house both in the front office and on-the-ice before they could right the ship. Along those lines, just how long is Joe Sakic’s leash in Colorado?

That being said, there should still be some tempered optimism for Colorado. They are a young team that can certainly improve through the internal growth of their roster and some bounce back seasons from their veteran supporting cast. A respectable season calls for significant improvements across the board, but given the inherent potential of their personnel, the Avalanche could be better than you’d think. They certainly won’t be worse.