Posted on April 13, 2018 by Brendan Ballantyne Leave a comment

The Toronto Raptors 2017/18 regular season has just come to a close and it has been a historic one at that. With a franchise best 59-23 record, the Raptors clinched the number one seed in the Eastern Conference and the best home record in the NBA. It’s clear a lot has gone right for the Raps this season and much of that can be attributed to the great work of Dwane Casey, the advancement of DeMar DeRozan’s game, the continued high-end stability of Kyle Lowry and the unmatched production from the bench. Because the NBA season as a whole came to an end on Wednesday night, the finishing touches have been placed on all of the matchups for the NBA playoffs that tip off on Saturday.

Your NBA Playoffs bracket! Who you got? pic.twitter.com/KXKpXpxUdI

As the number one seed, the Raptors drew the number eight seeded Washington Wizards. The teams split the season series 2-2 while going back and forth between results in fairly tightly contested games each time (WSH 107-96, TOR 100-91, WSH 122-119 and TOR 102-95). Let’s preview the matchup ahead:

Tale of the Tape

The Raptors offensive efficiency has been very impressive this season as it has consistently been at the top of the league. While the Wizards managed to finish in the middle of the pack despite the absence of their starting PG for half of the season. The reality of this offensive matchup is actually a lot closer than I would’ve expected as the Wizards actually have an advantage in three point percentage (37.5% to 35.8%), assists per 100 (25.8 to 24.8) and offensive rebounding per 100 (10.3 to 9.9). But the fact remains that the Raptors simply are the better at putting the ball in the basket. Their two point attempts are converted at a better clip, they attempt more three pointers in their winning formula and are 4th in the NBA in free throw percentage. While there are a few things that are encouraging from a Wizards perspective, we’re talking about a Raptors offense that scored more than the Warriors per 100 possessions this season, which simply can’t be ignored.

This is fairly similar to the breakdown on offense, the Raptors find themselves in the top five and have for the course of the regular season and the Wizards are somewhere in the middle. Simply from a personnel standpoint I see the Raptors combination of bigs (Valanciunas, Ibaka, Poeltl, Siakam) causing the Wizards some issues. The Wiz are one of the few teams that consistently lean on a classic style centre in Marcin Gortat, but Valanciunas is quite capable in that matchup, as is Poeltl. But looking deeper, the Wizards lack the size and defensive presence to really scare me away, unless they’re planning on sending out a heavy dosage of Ian Mahinmi and Jason Smith. In that case, be my guest. 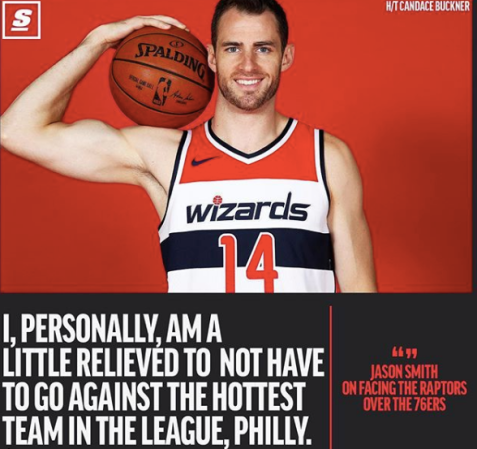 Jason Smith averaged 3.4 points per game in 8.6 minutes per game this season…this is hilarious.

Anyways, in a small lineup the Wizards do possess some defensive length and athleticism in the form of Otto Porter, but the Raptors boast a very long and capable defensive lineup that has allowed them to average the 12th highest defensive rebounding percentage and second highest blocks per game while holding opponents to the third lowest effective field goal percentage. The Wizards aren’t in the top 15 in any of those categories.

ESPN’s “FiveThirtyEight” put out a short clip fairly recently that focused in on the Raptors second unit’s dominance, it’s kind of crazy how much of an impact they’ve managed to have on both ends of them floor when the majority of the players are sophomores that have been developed within the Raptors organization. They have now formed themselves into the feared #BenchMob and have even campaigned for a shared 6th man of the year award. While that won’t happen, I’ll still take this group over Tomas Satoransky, Kelly Oubre and company .

These two teams have fairly similar foundations in that they’re both built upon the leadership of All-Star guards. The matchups of Lowry/Wall and DeRozan/Beal will determine much of how this series plays out. John Wall has been injured for much of this season as he’s only appeared in 41 games in the regular season due to injury, but when healthy he’s a player that has the ability to be the best player on the floor in this series.

The main (and maybe only) critique of the Raptors is their All-Stars not providing All-Star production in the playoffs and based on the past couple years of playoff appearances, those comments can certainly hold some weight. While the Raptors are quite reliant on their top two players to provide offense, the Wizards lean on Beal and Wall even more so and with that comes a great deal of pressure as well. The reality is that these are probably the two best backcourts in the East and a high quality matchup at that.

Looking at this matchup from a numbers standpoint it’s pretty clear that the Raptors should be the favourites. I mean to be honest, it’s a 1 v. 8 matchup, you shouldn’t even have to look at the numbers to come to that conclusion. But for years the narrative of the Toronto Raptors playoff mishaps and let downs have been built up to the point that us Raptors fans can never shake the seed of doubt in the back of our minds…even as the team with the second best record in the NBA.

On the other hand, this season’s edition of the Raps second unit has the ability to spell the starters to a certain degree more than they have ever been able to in the past, so I feel that if Lowry is to struggle with his shot they will still be able to roll. And with that, these Raptors are the better TEAM and possess more depth and defense than the Wizards, which I think will eventually wear the opposition out. Wall and Beal certainly have the ability to win games if/when they take over, which I think they might for game or two, but I’m confident that the Raptors will come through and advance past the Wizards.

I know we shouldn’t really look ahead, but this isn’t an encouraging trend: