Posted on November 8, 2018 by Thomas Waind Leave a comment

Buddy Buckets baby. Is there a riskier lottery pick than the limitless range college assassin? For every Steph Curry there seems to be hundreds of busts like Jimmer Fredette, Doug McDermott and Nik Stauskas.

Buddy is still young enough that he could still figure it out and develop into a CJ McCollum type game breaker. It was probably a bit of a stretch for the Kings to make him the centre piece of the Boogie Cousins trade but the offensive upside still remains.

I’m not a huge fan of the Pelicans jerseys or colour scheme in general so for me to pick one up it would purely be because of the name on the back. The shortlist of Pelicans that move the needle for me: Anthony Davis, Demarcus Cousins, Rajon Rondo, any Lance Stephenson jersey plays, Jimmer Freddette (a bust but a legend) and Buddy Hield. If you don’t think Buddy is worth your hard earned cash soak up some of these college highlights:

Oklahoma Buddy Hield was a tsunami of buckets.

I like the cut of Damian Lillard’s gib. He’s an all-star calibre point guard who is just on the outside looking in when it comes to the upper echelon of point guards. While some players would be content with that standing and the paycheque it comes with, Dame Dolla plays with a chip on his shoulder. Whether he’s spitting bars or hitting game winning jumpers, Lillard’s a fun guy to root for.

This is one of my favourite jerseys in my closet because of Portland’s unique and sleek design. Also Lillard is a good enough player that people want to rock his jersey and just fringy enough to impress some basketball fans. Plus I got this one super cheap from the NBA store when the league was shifting to the Nike brand so every old Adidas jersey was on clearance. Pro tip: keep an eye on the MLB or any team stores when the league shifts from Majestic to Under Armour in the winter of 2020.

The 2000’s Cavaliers jerseys are so bland and inoffensive it’s hard to really love them. The 2000’s in general were a time for pale colours, bland designs and mediocre logos. But wearing this era of Lebron jersey really shows that my boy Mikey G as a day one Lebron fan. Before Lebron gained 50 pounds, won his rings and moved to LA, he was a high-flying freak who carried the decrepit corpse of a Cavs roster to the 2007 NBA Finals. Championship Lebron had Wade, Bosh, Kyrie and Love. 2007 Lebron had Drew Gooden, Larry Hughes and Zydrunas Ilgauskas. 2007 Lebron was my favourite Lebron.

If you don’t love me at my: 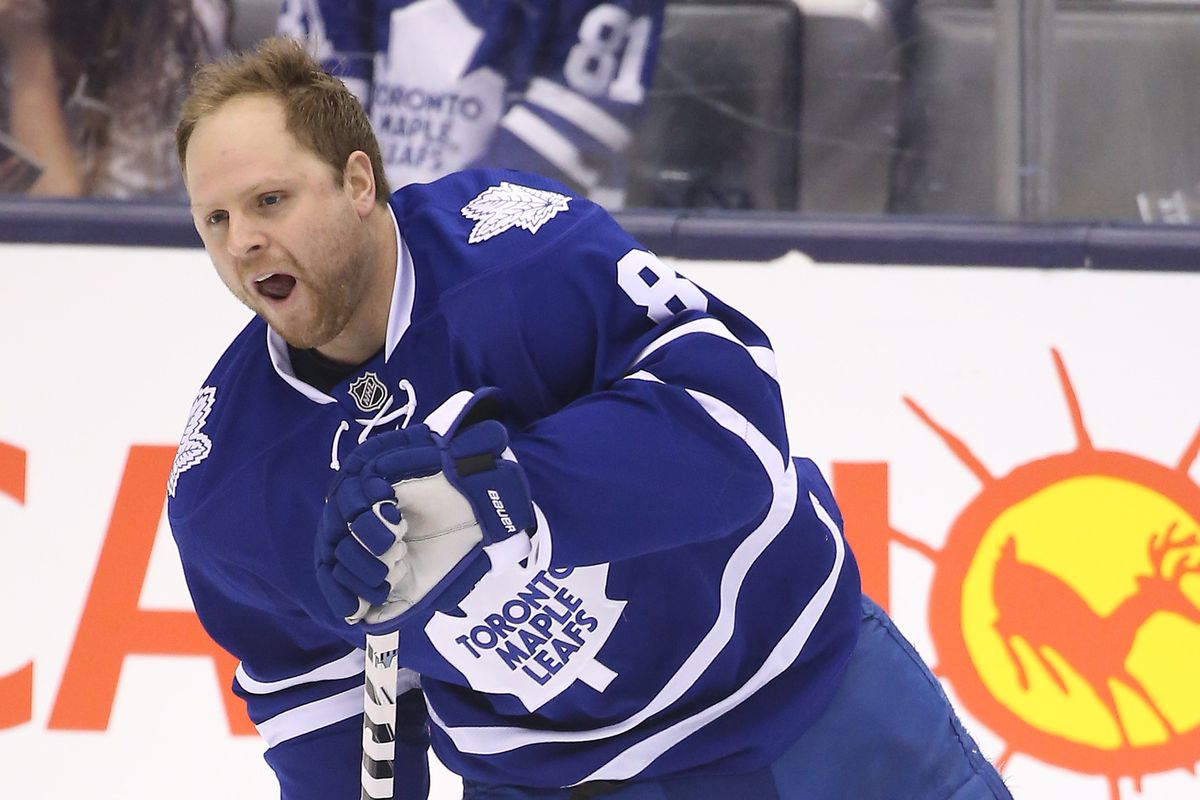 Then you don’t deserve me at my:

Phil Kessel is a Stanley Cup champion. Deal with it Steve Simmons.

Any Leafs fan with a jersey circa 2016 (the year of our saviour Auston Matthews) is a true ride or die fan.

Ray continues to hit home runs with his jersey game. This Yzerman jersey brings some major heat. When Yzerman wore this jersey in 1984, he was the the third-youngest to play in an NHL All-Star Game at 18 years and 267 days old. Per Nicholas J. Cotsonika of NHL.com:

Not until Jan. 30, 2011, when Carolina Hurricanes forward Jeff Skinner played in the All-Star Game at age 18 years, 259 days, did someone younger do it.

He found himself in the locker room at the All-Star Game with Glenn Anderson, Paul Coffey, Grant Fuhr, Wayne Gretzky, Lanny McDonald, Mark Messier and Denis Savard, with whom he now is enshrined in the Hockey Hall of Fame.”

The Charlie Conway jersey seen around the world:

As someone with a front row seat to this scene, I can say with certainty that this video from the 2017 Brock St. Patties Day must be the hardest that someone has been hit by a door. Once you get past the linebacker trying to run through the door and the unsuspecting recipient of the door’s wrath, it is obvious that the star of this video is Adam AKA the laughing captain Charlie Conway.

I had these Heat ranked as my number one in my quick hitting City Jersey Power Rankings last week. I’ll dedicate a whole blog to the jerseys once they’ve all been released.

Pandering to the huge Chinese basketball market is never a bad idea. Money is money.

I’m not a big camo guy so these jerseys don’t  really do it for me. I’m sure the intersection of hype beasts and hoops fans will gobble these up.

JUST IN: NFL strikes deal with @EpicGames. Starting Friday, gamers can go into Fortnite’s in-game store and outfit their character in any NFL jersey and add any number. pic.twitter.com/PaRWV6Pw7G

What if MLB teams played hockey instead? (via reddit/theslak) pic.twitter.com/1JKFise2aF

These are actually pretty cool!

What if the NFL played hockey instead?

Order is based on the standings going into week 10. Let me know your favorites! pic.twitter.com/I1aMaDHWJd

The Red Wings jersey is basic, the Bruins jersey has too much going on, the Leafs jerseys are rip-offs of the old Summit Series jerseys,

the Rangers jerseys look like Tommy Hilfiger sweaters, the Black Hawks are just gross looking and Montreal…just sucks. Good for the NHL to try something new with their video game-exclusive jerseys, but the end result looks like they’re not even trying.

BREAKING: Looks like the last of the 2018-19 third jersey have leaked! #LAKings #GoBolts #TMLtalk

Speaking of not trying, what’s up with Tampa Bays new jerseys?

According to @icethetics, these are the new Tampa Bay thirds. pic.twitter.com/hxZ4xfwSCk

The Kings alternate is fine if not unspectacular. The St. Pats jerseys always seem to play with the hockey jersey crowd when the Leafs bring them back.

It's here. Get your 2019 Bridgestone NHL Winter Classic jersey at the @BostonProShop on Level 2 of TD Garden. #BackOutdoors pic.twitter.com/H21VAz87ap

These are very sharp. My early impression is that I think that they’re my favourite Bruins Stadium Series/Winter Classic jerseys to date. Which is saying a lot because the Bruins always seem to hit these out of the park.

Toronto, we got you.

The Toronto Raptors may as well just take my money right now.

These are kind of cool in the sense that you don’t see a lot of pure black with white accent colour schemes. The ones that immediately come to mind are the old Islanders third jersey and the current Brooklyn Nets look. Although these do kinda make Toews look like a bit of a jail bird.

Have a look at these 👀@BramptonBeast will wear these phenomenal jerseys on Sunday for their Remembrance Day game! pic.twitter.com/TmLGkyVTr1

Also shout out to my boy Mitch interning at the Brampton Beast. Meant to get this jersey in the blog earlier. These Remembrance Day jerseys are really nice.

A couple kids who can’t decide who the 🐐 is (📷 by @gridironuk) pic.twitter.com/MiNMK0xSIe

These jerseys went viral last Sunday when the Packers and Patriots squared off in one of the most anticipated games of the weekend. In my mind nothing encapsulates the participation trophy generation more than these kids. Sports are about winning and being the best. Sports fandoms deal in absolutes and passion. It means participating in Lebron vs. Jordan debates and not hedging in saying “well I think they both have their merits and are certainly two of the best of all-time.”