Posted on December 19, 2015 by Thomas Waind Leave a comment

On Tuesday December 8, in Toronto’s 3-2 shootout win versus the New Jersey Devils, captain Dion Phaneuf played in his 400th game as a Toronto Maple Leaf. Love him or hate him you can’t deny that this is an impressive bench mark. Especially since many people thought he would be following Phil out the door this past summer.

As a result of his play, Dion’s trade value hasn’t been higher since he had signed that ill-advised contract  7 years $49 million contract that won’t expire until 2021. But instead of looking at any future potential trades, I want to look back at the controversial trade that brought Dion to Toronto.When I first heard that the Leafs had acquired Dion Phaneuf, I was ecstatic. Then I heard what they gave up for him and I was already planning the Cup parade route. Before I lose all credibility, keep in mind Dion came third in the Calder Trophy voting in 2005 behind Ovechkin and Crosby, was the runner-up for the Norris Trophy in 2007-08 AND made the first All-NHL Team in the same year. This guy had 75 goals in 378 (good for 16.30 goals per 82 games) and was just 24 years old when the Leafs acquired him. The Leafs were getting this young stud for the thrift store-price of Matt Stajan, Nik Hagman, Ian White and Jamal Mayers.

Yet in spite of this, if I could go back, I would not do this trade again.

Before I continue, I want to make this very clear: I am one of the few fans who actually likes Dion Phaneuf. He may not be scoring at nearly the same rate as he did in Calgary and has only made one All-Star game in seven seasons as a Leaf. He gets caught pinching too often and is prone to being out of position attempting to land hits. But people are way too quick to make Phaneuf pylon jokes. He is not the number one defenseman everyone thought he could be, but he can still play 20 minutes a night filled with laser slap shots, game-changing hits and a usually-solid defensive game. He is just incredibly miscast.

That being said I still would not do the trade again. If you isolate the trade–giving up Stajan, Hagman, White and Mayers for Phaneuf, Fredrik Sjostrom and Keith Aulie–it is a lopsided win for the Leafs every time. The reason I would not do the trade, is because of what it signified. I believed that it blew up the Toronto Maple Leafs chances of pulling off an effective rebuild.

Brian Burke was brought into Toronto so he could build the team back to glory. He promised to bring “truculence and pugnacity” to a timid team and to launch a rebuild that would lead to a Stanley Cup. I’ll admit, I ate up every word of it. After he made the Phil Kessel trade, I believed in him when he said that acquiring young talent for draft picks in trades was smart. I loved the quote he gave when asked about the “Pittsburgh model” of rebuilding: “they won a god damn lottery and they got the best player in the game.” 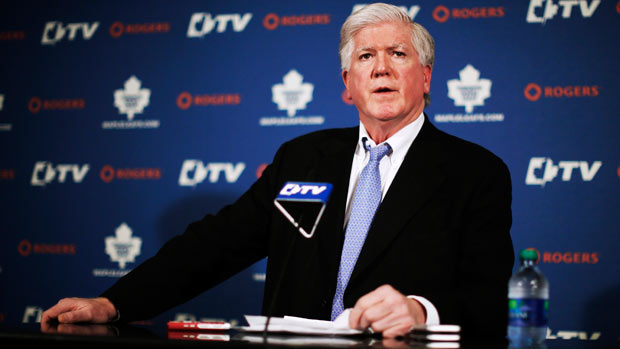 Obviously we have the hindsight to see that that trade was very regrettable. Every time Seguin scores a highlight-reel goal I feel nauseous. Burke acquired a young impact winger in Kessel, but it was at the cost of being able to draft cheap young-talent. It could have been the 10th overall pick and still might have been regrettable in today’s salary cap NHL. It ended up being the second overall pick…

When Burke made the Phaneuf trade roughly a year later, the clock on the rebuild had stopped and the clock to be a playoff team had started. Phaneuf was a great young defenseman at the time of the trade. Acquiring Dion’s talent raised the floor of the team from out of the draft lottery (or at least the discussion of having the shot at a number one pick). Subsequently the salary that came with Dion’s talent lowered the ceiling of the team.  After Burke built the team around Dion and Phil, he no longer had the cap space or draft picks necessary to acquire the complementary pieces to build a real contender. Even if Dion had been the defenseman we all thought he could be, the Leafs were still a starting goalie and a number one center away from being serious contenders. But Burke constructed a team that couldn’t accommodate those two needs under the salary cap. So as a result, Leaf fans received a team that wasn’t bad enough to draft for a Nathan MacKinnon-type player, and certainly not good enough to compete for anything more than the eighth seed.

Over Brian Burke’s time in Toronto he made many mistakes. The one transaction that I would say summed up his tenure is not the Kessel or Phaneuf deal. I would say that it was the head-scratcher where he traded his 2011 1st and 2nd round picks (30th and 39th) for Anaheim’s 22nd overall pick. On the surface this trade doesn’t jump out. But once you realize that the Leafs moved up to take Tyler Biggs,while the Ducks selected Rickard Rackel (currently playing on Anaheims top line with Getzlaf and Perry) and John Gibson (considered one of the top goalie prospects in the league), you will feel violently ill.

Thankfully, new management seems to have a polar opposite philosophy. They seem to value their draft picks much more than ever Burke did. So far their rebuilding strategy has been to acquire as many draft picks as they can, to give them the best chance to unearth a Jamie Benn-like talent later in the draft. This was certainly evident when Kyle Dubas traded the 24th overall Nashville first-rounder for multiple second and third rounders in last year’s draft. This gave Mark Hunter multiple shots at identifying and drafting potential impact players later in the draft.

To bring this conversation full-circle, it will be interesting to see what the Leafs do with Dion Phaneuf. It is obvious that he could be a valuable second-pairing defenseman on many teams in the NHL. The issue is, he is being paid like a number one defenseman. If the Leafs trade him they will have to eat a bunch of his salary, and will not get the get the value back that his talent deserves. Some teams might get more desperate when it is closer to playoffs and teams suffer key injuries. But I would not be shocked if they just bite the bullet and let Phaneuf play out his contract. That is, I can see the Leafs doing this as long as he still brings some value to the team. With young defensemen like Reilly and Gardiner still developing, it is key to have a veteran on the back end who can eat up minutes.

At least for the first time in a while I feel comfortable that the Leafs front office will make the right decision. I believe they will deal with Dion in a way that will have the most positive impact on the team’s future. They seem to have a much better grasp on the long-term repercussions of their moves than the Burke regime ever did.