Posted on September 12, 2017 by Brendan Ballantyne Leave a comment

Part 3 of 31 in our NHL previews where Waind, Burgess and I rank each NHL team 1 through 31 and give you an outlook on their season. We’re delivering these preview in the order that we collectively power ranked them. It’s far from perfect but then again, so are the Canucks.

Check out our other previews:
#31. Colorado Avalanche
#30. Vegas Golden Knights

The 2016-17 season was a complete waste for the Canucks and their fans. It reminded me a lot of those pre-Shanaplan Leafs years. A below average, high payroll team spinning its wheels trying to squeak into a final playoff spot. It just felt that there was no real light at the end of the tunnel. The Canucks quickly found themselves out of the playoff hunt last year, which made the mismanagement of their situation that much more glaring. Midway through last season they were at a crossroads.

They gave the Sedin’s another chance to lead a “playoff” team but, at age 36, they dropped off in a major way. Management swung for the fences and signed Loui Eriksson to a big contract to play on their wing… and he was awful. They hoped that the likes of Alex Edler, Erik Gudbranson and Ryan Miller could protect the net and carry them for one more run. Unfortunately it just didn’t happen. 2013 first round pick Bo Horvat was essentially the lone positive with a nice breakout season.

The Canuck’s 2011 Cup Final appearance really wasn’t that long ago, but after last season’s poor performance, it is clearly time to reset.

With this upcoming season being a contract year for the Sedin twins, the largest of moves may (should) be still to come. They brought in a rookie head coach in highly-regarded Travis Green and signed vets like Sam Gagner, Michael Del Zotto and Thomas Vanek to join a group that could feature a cluster of young players. But this team simply lacks high-end skill. The loss of Ryan Miller in net– while his numbers were subpar last year–can’t be overlooked. With a weak Jacob Markstrom/Anders Nilsson goaltending tandem in addition to an offensively challenged forward group, to quote Mike Babcock “there will be pain”.

At just 21 years of age, Horvat is coming off of a season where he led his team in goals (21) and points (52). It’s certainly encouraging for the Canucks that Horvat has provided a steady increase in point production over each of his first three seasons in the league with 25, 40 and of course his team-leading 52 point 2016-17 season. Bo just recently signed a 6-year contract extension, so it’s clear the Canucks will be expecting more of the same production, and will likely turn him loose with even more regularity as he’s looked like their number one centre of the future. Given this is a transition stage for the Canucks, we’re going to see Horvat in every situation next season as he looks to lead the way during this point in time.

Team’s Strength: These kids are alright

While it’s taken a while, the Canucks’ are starting to build a stable of solid young players. I’ll focus more on specific names shortly, but it’s clear the Canucks have taken notice that skill players are the new currency in today’s NHL, aka speed and skill has become more valuable than size and strength. Now that they’ve done well at drafting and injecting some talent into their farm, development is now the next huge hurdle for them. But the Canucks are now at a point where they will have some NHL ice available to give the kids a look, which is always a nice option to have (when you aren’t contending of course).

Neither Jacob Markstrom or Anders Nilsson have ever really held down a role of starting goaltender so far in their NHL careers. They’re both Swedes, they’re both 27, and they’re both likely to go through rough times in the Vancouver net. They aren’t set up for success by having to backstop a weak defensive team that won’t provide much in terms of offensive support. The good news for both of them is that for the first time in each their careers there will likely be an open competition for the starting role and head coach Travis Green will ride the hot hand. So theoretically, the best option for a given night will always be playing, but take “best” with a grain of salt.

Right Winger Brock Boeser, Defenseman Olli Juolevi and Left Winger Nikolay Goldobin are likely the headlining young players that could crack the Canucks lineup right out of camp. Boeser and Goldobin have each seen their brief stints in the show before, but would still be considered rookies for this upcoming season.

Olli Juolevi is an exciting blueline prospect for the Canucks and the team is definitely hoping he is the defensive headliner of their future as he was made the 5th overall pick in 2016 after winning a Memorial Cup Championship with the London Knights.

As for this past year’s draft, the Canucks had eight total picks, four of which were in the first three rounds. They addressed their clear team needs and that was skilled forwards and goaltending. Their first three picks were Elias Pettersson, C (5th), Kole Lind, RW/C (33rd) and Jonah Gadjovic, RW (55th), all forwards with track records of offensive production at lower levels. They followed that up with the selection of Windsor Spitfires goaltender and reigning Memorial Cup champion, Michael DiPietro 64th overall. Pettersson is obviously the one to track, he’s not likely to crack the NHL team for a year or two, but he’s proven he has an impact offensive skill that should translate at any level. He put up 43 points in 41 games as an 18-year old in the second tier of Swedish pro hockey, but will likely make the jump to the Swedish Hockey League this season. Pettersson’s excellent skating and playmaking abilities make him something to be excited about for Canuck’s fans.

Boeser burst onto the scene in his short, introductory NHL stint last season. The 2015, 23rd overall pick began with a goal in his first career game and carried five points of production through his first nine games. The 20 year-old winger from Minnesota is one of the more promising players the Canucks have, and he’s going to be relied upon to take a big step this season and onwards into the future. It’s likely you’ll find this guy on Bo Horvat’s right side for a long time coming. 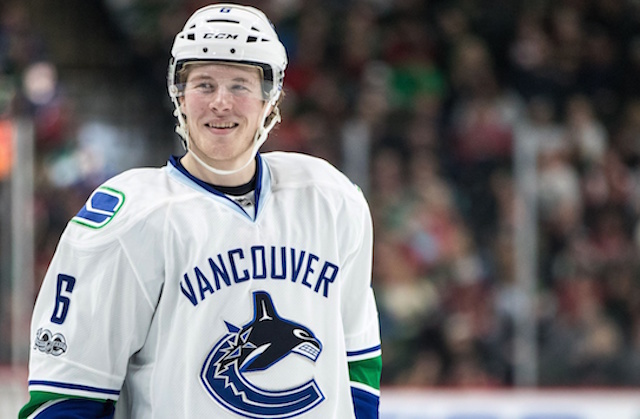 Listen, I had this team ranked behind the Vegas Golden Knights… that’s how bad this year could be. Worse than an expansion team. I know I may sound dramatic, but the Canucks are in full bottom-out mode and it looks like they’ve finally accepted that fate. This roster lacks enough impact players up front. They do have some veterans like the Sedins, Eriksson and Vanek who can carry the load if the Canucks want to ease the youngsters into the lineup, but they are certainly not the players they used to be.

The lack of reliable goaltending is another part where this team will feel a sting. There is definitely the potential for some ugly nights because this pair is unlikely to bail out all of the mistakes that this young, below average team is bound to make. Best case scenario is one of Markstrom or Nilsson emerges as a legit, serviceable NHL starter.

Another point, this is Travis Green’s first season as an NHL coach. He’ll have his own growing pains and there will be an adjustment stage as well. And there’s nothing wrong with that. I like the move to bring in Green because it sets a foundation for years to come. Young players and a young coach can struggle, grow and the hopefully succeed together in the future. Just for now, it looks like they’ll be near the bottom of the league and drafting high again. But the thing is, that’s exactly where they want to be.