Posted on October 13, 2017 by Thomas Waind Leave a comment

Part 19 of 31 in our NHL previews where Ballantyne, Burgess and I rank each NHL team 1 through 31 and give you an outlook on their season. Each of our previews will be given to you in order of where we collectively power ranked that team.

Coming off of a dizzyingly bad 2015-16 season, one that saw the Leafs finish with a league-worst 69 points and Leo Komorov as their only All Star representative, it all paid off when the Leafs locked up the first overall pick in the draft. The selection of Auston Matthews turbo-charged Toronto’s rebuild and the Leafs rocketed up the standings because of revamped young roster. The acquisition of Freddy Andersen in net and contributions from a huge and talented group of rookies went a long way in the Buds jumping up 26 points and grabbing a Wild Card spot.

The Leafs received an unprecedented amount of scoring from their rookies. Matthews led the way with 40 goals, Nylander and Marner each had 61 points, Connor Brown had 17 regular strength goals (Ovechkin finished with 16 last season), Nikita Zaitsev seamlessly stepped into a second pairing role, Hyman showed-off his elite puck-retrieval skills on Matthews’ left wing and Leivo, Soshnikov and Kapanen were very effective in limited action. The future is definitely bright.

Overall none of the moves significantly improve the team this year. The Marleau move seemed like overkill for a team already deep on the wing, but he’s a good locker room guy for such a young team and he still skates like the wind despite being 38 years old.

Hainsey doesn’t fix the blueline but he’s a moderate upgrade over Hunwick and his contract was pretty moderate given the market this season. Brian Boyle is a tough loss but was a bit of a luxury for a fourth line center. I have no doubt that one of Dominic Moore, Eric Fehr or Miro Aaltonen should be able to step into the minutes and play a reasonable fourth line centre.

Any further strides made by the Leafs this year will be through the progression of their youngsters. Considering a sizable chunk of their team were rookies last year, here’s hoping the “sophomore slump” is a myth.

Given Toronto’s long list of Hall of Fame Players, they have never owned one of the leagues premier players. Sure Ted Kennedy and Babe Pratt won Hart trophies way back in the day. And sure Mahovlich, Apps, Gilmour and Sundin were great players. But they never owned a “generational” talent. Matthews might be the Leafs best shot at owning such a player. After an electric 40 goal rookie season, Matthews looks like he could be the Lemieux to McDavid’s Gretzky.

He’s got the speed, size, hands and IQ to be an elite center. Going into the draft he was compared to two-way pivot beasts like Teows and Kopitar, but last season he showed an elite knack for scoring that scouts just didn’t anticipate. If I sound excited, it’s because  I sure as shit am.

Team’s Strength: Talent and depth on the wings

Part of what made the Leafs so dangerous last season was the fact that they could roll out three pretty strong scoring lines forcing the other team to pick their poison. At season’s end even their fourth line was able to make other teams pay for mistakes. This depth up front, more specifically on the wings, made the Expansion Draft a tougher decision than most. While they ended up losing a pretty solid young forward in Brendan Leipsic, it didn’t even make a dent in their in their overall forward depth.

The addition of Patrick Marleau just adds another speedy weapon upfront. He’s already meshed pretty well on the Kadri-Komorov line. Babcock wisely didn’t tinker with the JVR-Bozak Marner line or the Hyman-Matthers-Nylander line leaving a very capable Connor Brown as the odd man out on the fourth line. If the Leafs do sustain an injury on the wing they have a few bullets in the chamber in Kapanen, Leivo, Soshnikov, Aaltonen, Grundstrom, Rychel  and, if everything goes wrong, OHL scoring phenom (but still just 20 years old) Jeremy Bracco. This is going to be a fast and exciting team.

Despite the Leafs picking up a legitimate starting goalie in Fredrik Andersen, they still have some difficulty keeping the puck out of their net. A significant part of that is due to their blueline. Unlike other weak defensive units in the NHL, the Leafs aren’t hurting for a lack of talent. Morgan Reilly, Jake Gardiner and Nakita Zaitsev have all shown tonnes of promise as strong puck movers in their young careers.

The main issues with the blueline tends to be their mental errors and just generally soft play in their own end. The mental errors will hopefully straighten out as these guys develop and gain more experience. I’m still holding out hope that Gardiner will make the last hurdle towards becoming an elite puck-moving defenseman and JUST STOP TOSSING PIZZAS UP THE MIDDLE.

As for the play in their own end, the Leafs blueliners are just too soft. As much as Roman Polak used to give me fits, he was one of the few Leafs last season who could actually win a net-front battle. Ron Hainsey’s a 15 year veteran of the NHL and should help in this regard. The toughest part of building a blueline is finding strong-skaters with good-playmaking tendencies, which I feel that the Leafs have done. The next part of development is getting these guys from Tomas Kaberle-level soft and becoming a more well-rounded group.

With such a young team on the big club, it’s kind of crazy that the cupboard isn’t bare in the minors. Above I listed all of the forwards they have waiting in the AHL. They have a couple of blueliners that could be knocking on the door.

Travis Dermott, the 34th pick of the 2015 draft and Canada WJC alum, was on the roster bubble at the end of training camp but ended up being sent back down. The 6’0″ left-handed shot looks to be more of an anchor on the Marlies blueline this year. At 208 pounds he’s big enough to move some guys, is a pretty strong skater is a reasonably good puck handler. Marlies coach Sheldon Keefe will look for him to be a lead a young group consisting of fellow prospects Justin Holl, Andrew Nielsen and Rinat Valiev. 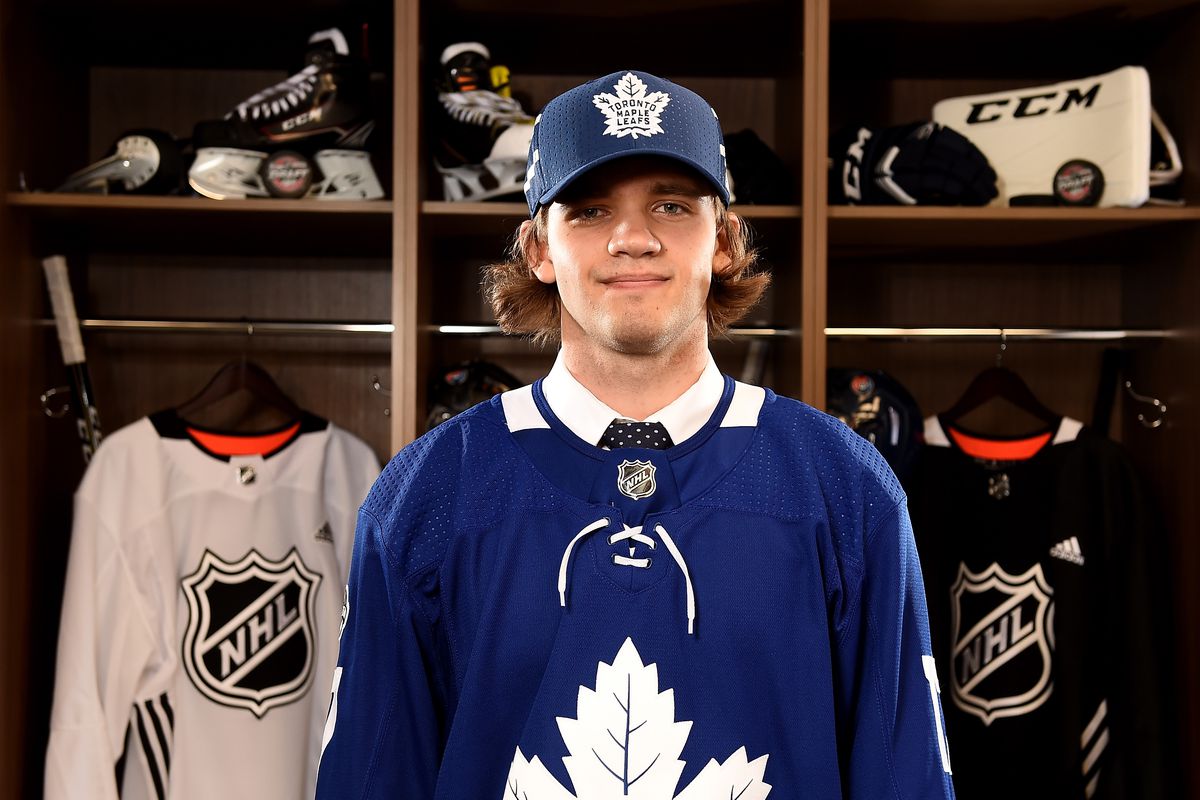 With a bunch of guys graduating from “prospect” status, Timothy Liljegren is now the top guy in the system. A guy who was considered to be the runner-up to Nolan Patrick going into last draft year, Liljgren ended up dropping all the way to the Leafs at 17th overall when all was said and done. It was a rough year for him, between missing some time and having to play through mono as well as falling out of favor with his coach on the SweHL’s Rogle BK, scouts found that Liljgren looked lost last year. But, as he showed with a dazzling performance in Toronto’s rookie tourney and training camps this year, he has real upside as a potential #1 puck-moving horse. He’s the early, early favourite for steal of the 2017 draft.

Even though Matthews is the team’s best player and Bozak has great chemistry with the team’s best winger, Kadri might be Toronto’s most important centre. He’s been Babcock’s top matchup guy and centre one of the PK units. This is key because it allows Matthews to grow into more responsibility gradually. Kadri foots this enormous responsibilty and was still able to rack up 32 goals and 61 points despite having stone hands Corporal Komorov riding shotgun on his line. Kadri has grown from an immature OHL glory boy to a super-pest centre with great scoring touch. He’d be an ideal second line centre on any team.

Last season was one of cautious optimism for me. Primarily a fan of Toronto sports teams, I can tell you firsthand that they tend to kick you in the teeth once you start to feel good about how things are going. Last season was tough. On one hand I had Matthews, Marner and Nylander breaking through and taking the NHL by storm, helping to get the Leafs back to the playoffs. On the other hand, 2013, Game 6, Boston.

I wore the gear. I watched the games. But I couldn’t bring myself to saddle up and completely buy in. But with every JVR goal, every Kadri drawn-penalty, every Andersen save, I was slowly reeled back in. Being the dummy that I am, I jumped two-feet back into the Leafs camp with the Game 3 overtime goal from Tyler Bozak to give Toronto the 2-1 series lead. By Game 6, that familiar, sinking feeling that I had missed so much when Marcus Johansson iced the series for Washington with a huge overtime goal. While it was a deflating loss, there’s plenty of optimism for the future.

After decades of watching losing Leafs hockey–if the losses weren’t enough they typically happened in the most embarrassing and ugly fashion–I am all in on this next generation of Maple Leafs.