Posted on October 26, 2017 by Thomas Waind Leave a comment

Part 25 of 31 in our NHL previews where Ballantyne, Burgess and I rank each NHL team 1 through 31 and give you an outlook on their season. Each of our previews will be given to you in order of where we collectively power ranked that team.

Last season was an unmitigated disaster for the Dallas Stars. A season removed from a 109 point 2015-16 season (good for top seed in the West), the Stars plummeted all the way to the draft lottery with a poor 79 point performance.

The main culprit for such a drop was the atrocious Lehtonen/Niemi goalie tandem where they put up a .902 and .892  save percentage (dis)respectfully. Neither goalie helped to hide the deficiencies of a thin blueline that was bullied all season long.

That being said, going into the season everyone knew that defense and goalies were a weakness (the extent they were weak was a little shocking), nobody expected a seemingly dominant offense being merely average. Their killer Seguin-Benn combo dropped from a combined 74 goals and 162 points in 2015-16 to 52 goals and 141 point last season. While this is troubling, its mostly due to a weak secondary offense that failed to keep defensive pressrue solely off of the first line. A 33 year-old Spezza only managed 15 goals, Patrik Eaves, Jiri Hudler, Ales Hemsky and Patrick Sharp all missed significant time with injury, and young players like Devin Shore, Brett Ritchie and Radek Faksa failed to move the needle with increased playing time.

Last year was truly an all-out attack of mediocrity from last year’s Cup favourites. The Stars were able to disappoint in seemingly every aspect of the game of hockey.

And cue the comeback. Widely regarded as the “winners” of the offseason, the Stars have bought their way right back into the Stanley Cup favourites conversation. While the offseason spending spree may have brought on contracts that will look rough down the road, GM Jim Nill has checked every box on the team’s wishlist.

In signing Bishop the team finally has a legitimate goalie, a positional vacancy that has been open since Marty Turco left town. Methot should help stabilize a leaky blueline and be able to anchor last season’s worst penalty killing units. Martin Hanzal and Alex Radulov offer the team a secondary scoring punch that should draw some defensive focus away from Benn and Seguin. Jim Nill and Stars management took their biggest swing this offseason, let’s see where these Stars land. 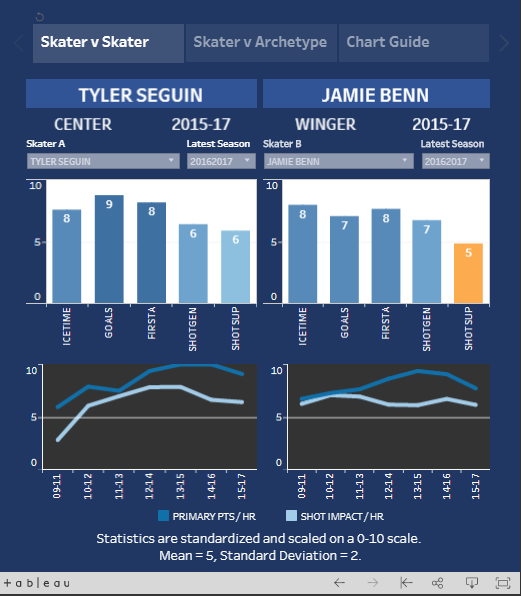 To be clear, Seguin and Benn are both among the NHL’s elite players. This could honestly be a coin flip because both players are just so impactful. Benn is a big, fast, physical force of nature who can wrack up points and is utilized on the penalty kill. He is irreplaceable to the Stars. But while he led the Stars in ice-time last year, I still lean towards Seguin as Dallas’ alpha dog.

Where I think Seguin separates himself over Benn–and from most of the NHL quite frankly–is his ability to create offense from nothing. While Benn is a freak of nature, you just can’t teach guys to do what Tyler can with the puck in a live game. Seguin scores at a higher rate, averages out to a better possession player and is also just flat-out more creative. Also, while we’re splitting hairs, even though Benn can play center it’s Seguin who more often than not finds himself centering the top line with Benn lining up on his left wing.

To be clear both players are stellar and I guess picking this team’s most valuable player would just be up to preference.

The additions of Alex Radulov and Martin Hanzal to an already talented group of forwards almost seems like overkill. Radulov returned from the KHL last season to spark Montreal’s offense with a quality 54 point performance. Hanzal is strong two-way player and is perfectly suited to line up as the second centre allowing the aging SPezz to shift to the wing.

This adds just more fire power to an offense that has seen Tyler Seguin score 316 points in 314 games and Jamie Benn score 335 points in 331 games since the 2013-14 season. Spezza still managed 50 points despite slowing down because of age and injury. In just his fourth NHL season Klingberg has already established as an elite puck moving defenseman and already has 9 points in 9 games this season. The team also hopes youngsters like Radek Faksa and Julius Honka can fulfill their immense offensive potential.

Even if this season doesn’t go right for the Stars you can bet goal scoring won’t be the issue.

Team’s Weakness: Keeping the puck out of the net

Part of the reason that the Stars haven’t been able to make the leap from a team with talented pieces to true contender has been management’s allergies to competent defensemen and goaltending. Both positions have seemingly been fortified with the acquisitions of Marc Methot and Ben Bishop. While both moves are no-brainers, they aren’t without question-marks of their own.

Methot has been the prototypical shutdown guy and a perfect sidekick for Erik Karlsson in Ottawa, but that may actually be an issue going forward. The fact that he has been glued to Karlsson’s hip means that he hasn’t had to be a primary puckhandler and has been pigeon-holed into a complementary role reminiscent of a glorified Roman Polak. While John Klingberg is a stellar defenseman in his own right, it’d be crazy to ask the 25 year-old to cover up Methot’s deficiencies to the same extent that Karlsson did.

As for Bishop, he could very well be the solution to Dallas’ goalie problem. But at age 31, coming off of an injury plagued 2016-17 and mediococre .910 save percentage, signed to a reasonably risky six-year, $29.5 million contract, there is plenty of room for error.

A silver lining of the brutal 2016-17 season was that Dallas was able to grab the number 3 pick in last summer’s draft. With the pick, the Stars drafted left-shooting defenseman Miro Heiskanen third overall. This pick was a no-brainer for a Dallas Stars team that is systemically weak on the blueline. Heiskanen has huge upside with puckmoving skills that have been compared to powerplay quarterbacks like Kris Letang and Ryan McDonaugh. While Heiskanen is only 170 lbs, his 6’0″ frame leaves plenty of room to grow. Unlike some of the guys taken around Miro in the draft, he is years away from potentially cracking Dallas’ lineup. Stars fans should be excited for his hot start this season with HIFK Helsinki of the SM-liiga where he already has 7 points in 6 games (for context’s sake, he had 10 points in 37 games last season.

While the contract term has people on the fence about the Ben Bishop signing, nobody can deny that he was the best goalie available this offseason. In his five season stint with Tampa, Bishop had a stellar .921 save percentage, made two All Star teams, finished top 10 in Hart Trophy voting twice and was a runner-up for the Vezina twice. All things considered this is a pretty stacked resume.

There will be a tonne of pressure on Bishop to deliver this year and that’s understandable. The Stars NEED somebody to just stop a damn puck. I think Bishop signing with Dallas was a perfect marriage in spite of the red flags I listed above. If he falters then it might be another trip to the draft lottery this summer.

A top six of Seguin, Benn, Spezza, Radulov, Faksa and Hanzal should be able to score truckloads of goals. This unit should be among the NHL’s elite. While the Ben Bishop contract could look bad in a couple of seasons, I think he could be a great bet right now. One thing’s for sure, you just couldn’t trot out the Lehtonen/Niemi again and expect different results. It’ll be interesting to see how the defense holds up. Klingberg is young and knocking on the door as an elite defenseman. Methot and Hamhuis are still solid in spite of their age and should be able to stabalize things. The telling sign of how they will perform as a unit will rest on the shoulders of the developing games of Oleksiak, Johns and Honka.

This is a tough team to read. We’ve seen this same core of players dominate and fail over the last couple of seasons. A conservative look would say that maybe this team is middle of the pack. But, after their huge offseason spending spree, it’s tough not to drink the Kool Aid. I like the look of this roster and wouldn’t be shocked to see Jamie Benn lifting the Stanley Cup when all is said and done. Giddy up Dallas.