Posted on November 1, 2017 by Cameron Burgess Leave a comment

Part 26 of 31 in our NHL previews where Ballantyne, Waind and I rank each NHL team 1 through 31 and give you an outlook on their season. Starting from the worst, we’ll be giving you the reasons why we ranked each team where we did.

The 2016-17 season can only be looked at as a disappointment after their first round sweep at the hands of the Predators. Despite finishing 3rd in the NHL, and 1st in both the Western Conference and Central Divison, the Blackhawks season came crashing to a screeching stop as soon as the playoffs started. After being shutout in the first two games to start the series at home, the Blackhawks took a 2-0 lead into the 3rd period of Game 3 in Nashville. Filip Forsberg scored twice in the period, before Kevin Fiala scored the game winner in overtime, ruining almost any chance the Blackhawks had at coming back into this series.

Game 4 didn’t go much better for the Blackhawks, losing 4-1 and bowing out of the playoffs much earlier than both the players and fans expected. It’s possible that this Chicago team is finally on the decline after a dominant stretch of 3 Stanley Cups in 5 years. It might finally be time that the Western Conference’s most dominant team hands the torch to another team, and there’s a good chance that the next powerhouse could be the team that ended their season early last April.

The Blackhawks saw a few familiar faces return to the team this offseason. Coming off a season in which the Blackhawks had just won the Stanley Cup, Brandon Saad was one of those players Chicago was forced to trade away a few seasons ago to save on cap space. While the loss of Panarin takes away a talented scorer from their lineup, Saad is no slouch as a secondary scoring option. While he may not be as skilled as Panarin, the Blackhawks have all the skill they need in Toews and Kane.

The issue for this team is now their depth. With most of their money sunk into that main group of 5 players, it makes filling out the rest of their roster pretty difficult. With spaces to fill and no cap space left to make moves, the Blackhawks have been relying on their prospects to step in and fill the gaps. Alex DeBrincat, Nick Schmaltz, and Ryan Hartman are just some of the players who have been relied upon to play some important minutes this season. The forwards for the Blackhawks are fine, but the issue I see on this team is their blue line.

Keith and Seabrook are now on the back 9 of their careers, aged 34 and 32 respectively. Not that they aren’t capable of still playing big minutes, but outside of these two the defense is pretty weak. Cody Franson has bounced around the NHL for most of his career but has never really been anything special, and now shows up in Chicago and is on their top pair with Keith. But despite this team’s lack of depth, I just can’t see this team missing the playoffs this season. Their core is too good to miss the playoffs, despite division rivals Nashville, Minnesota and St. Louis all having strong teams. They might not be as strong as they were a few seasons ago, but the Blackhawks should still be considered one of the top teams in the league.

After leading the team with 89 points last year, Kane showed once again that he is the most important player on this team. Since entering the league in 2007, Kane has put up 764 points in 752 games and has made countless goalies look like amateurs with hands that he shows off time and time again. Not only is he the most offensively talented players on the team, but also one of the most dynamic offensive forces in the NHL. Over his career, Kane has provided the team with big goals in seemingly every possible situation including the Stanley Cup winning goal in 2010 against the Flyers. Without many options around him, Kane will once again be relied upon to shoulder the load of the Blackhawks forwards and make up for the scoring lost with the Panarin trade. 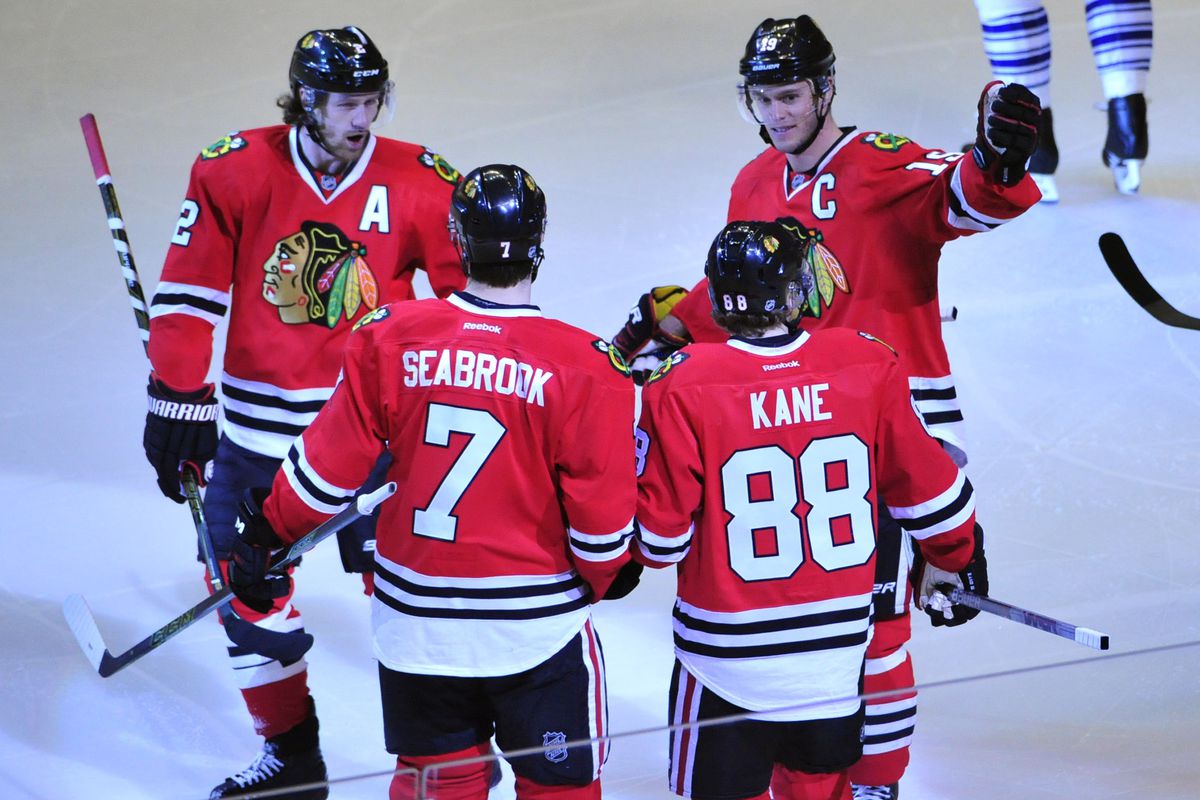 Like most teams in the salary cap NHL, the Blackhawks roster has changed a lot since 2010, but one thing remains constant. The group of Toews, Kane, Keith and Seabrook has been together since Kane joined the league in 2008. All 4 players are Chicago draft picks, with Keith being the only one not picked in the first round. Despite all of the moves Chicago has had to make, this group of players has been the nucleus of the Blackhawks for nearly a decade. Toews and Kane combined for 147 points last season, making them one of the highest scoring duos in the league last season. With Toews (29) and Kane (28) still in the prime of their careers, the Blackhawks have a solid pair up front to lead the rest of their young players and turn them into competent NHL players.

Another player that has become part of that same core is goalie Corey Crawford, a 2003 second round pick. While he didn’t become the starter until the 2010-11 season, the year after Chicago won their first of three Stanley Cups with this group, he was their guy when they won the Cup in both 2013 and 2015. While in my opinion he’s overrated, this season should show a lot about how important he really is to this team. With the defense being the weakest it’s been since he started playing, now is the year more than ever before that the Blackhawks will need to rely on Crawford to steal a few games for them. 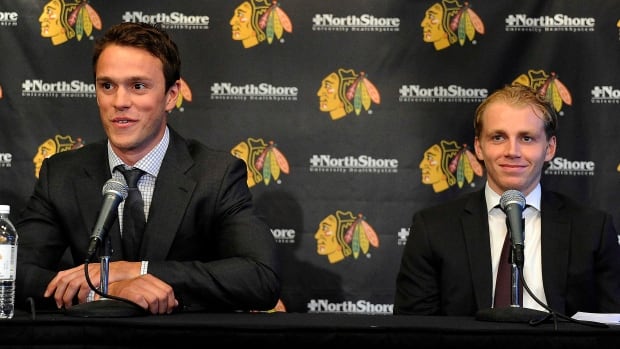 The Blackhawks biggest issue has always been the salary cap, with most of their money locked up in their core group of players. Kane and Toews are each making $10.5 million, Seabrook at $6.875 million, Crawford makes $6 million and Keith makes $5.538 million. That’s nearly $40 million tied up in just 5 players.

That means that things get pretty complicated when trying to fill out the roster, and we’ve seen in that past that the Blackhawks have had to get rid of some of their top players in order to keep that core together; Dustin Byfuglien, Andrew Ladd, Patrick Sharp, and Niklas Hjalmarsson to name a few. Of course, Chicago has been going through this cycle for years and it seems like every time they trade away players to clear cap space we say “This is the end”, yet every time they go on with business as usual.

Now on the first line alongside Jonathan Toews, Chicago’s top prospect Alex DeBrincat is being expected to continue the style of play that saw him score 332 points in 3 seasons with the Erie Otters. How DeBrincat fell to the Blackhawks in the second round of the 2016 Draft is something I’ll never understand, but that’s besides the point. Just 12 games into his NHL career, the 19 year-old is holding his own. With 1 goal and 4 assists so far, it may not be the type of numbers people are used to seeing but he’s averaging just 14:04 minutes of ice teams per game. As he gets more accustomed to the speed and physicality of the NHL, along with getting a bit more of an opportunity to play, DeBrincat should become a fan favourite in Chicago in no time.

He may be in the twilight of his career, but Sharp still has the ability to find the back of the net. After leaving the Blackhawks to join the Dallas Stars for the 2015-16 season, he was coming off a relatively down year in Chicago, scoring just 16 goals while adding 27 assists for 43 points. After 2 seasons in Dallas green, Sharp found his way back to Chicago on a team friendly 1 year, $800,000 contract. At 35, he’s no longer expected to put up points like the last time he wore a Blackhawks jersey, but instead just provide some scoring depth along with mentorship for a lot of the younger players now on this team. This signing was a win-win situation for both parties. For Sharp, he gets another shot to prove he’s still an NHL-calibre player after scoring just 18 points last season along with another chance at winning a Stanley Cup. For the Blackhawks, they get a player who proved during his previous time with the team that he can score, someone who can be a leader both on and off the ice, and all of this for a small price. If it works out it’s great, but if not then the Blackhawks don’t lose much.

As much as I hate this team (partly because I don’t like Crawford, partly because I’m still bitter about the 2013 Stanley Cup Finals) I can’t see them putting together anything but a successful season. The end of this dynasty may be in sight, but for right now they’re still too good to not be able to compete. They might not be the best in their division this year, but they’re still making the playoffs and we’ve seen that come April anything can happen. So for now all we can do is sit back, watch, and enjoy as Patrick Kane continues to make goalies all over the league look like 12 year old kids.